The Australian Dollar has enjoyed an impressive rally throughout October with both AUD/USD and AUD/JPY climbing roughly 2%. The technical outlook for AUD price action turns less sanguine, however, as the Aussie pivots lower after touching a major level of confluent resistance.

Meanwhile, a wave of risk aversion appears to be seeping back into markets – broadly due to a firming Fed, US-China trade war developments and Trump impeachment headlines – and could provide fundamental catalysts that accelerate the Australian Dollar’s bearish reversal potentially unfolding. 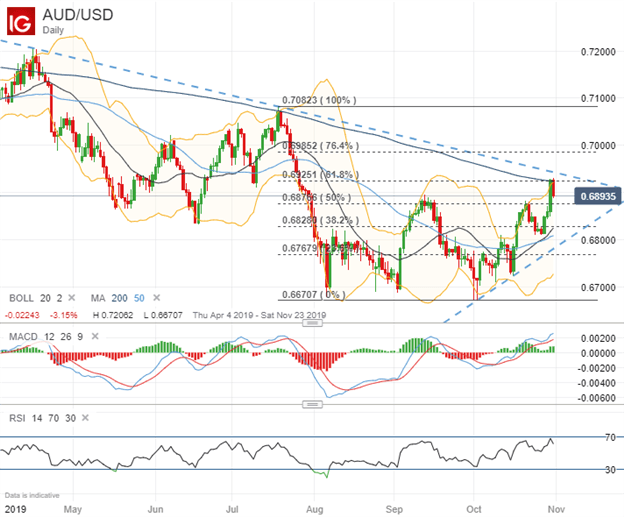 Spot AUD/USD price action has begun to bleed lower after colliding with a critical level of technical resistance: the 200-day simple moving average. This area of confluence is also highlighted by the 61.8% Fibonacci retracement of the Australian Dollar’s bearish leg from its July 18 intraday high to its October 02 intraday low.

The Aussie’s broad bearish trend – identified by the series of lower highs recorded since early 2018 – also underpins technical resistance faced by AUD/USD. However, the Australian Dollar’s possible reversal lower could be short-lived if downside is thwarted near technical support provided by the mid-point retracement of the previously mentioned bearish leg and confluent resistance-turned-support around the 0.6850-0.6900 price level. 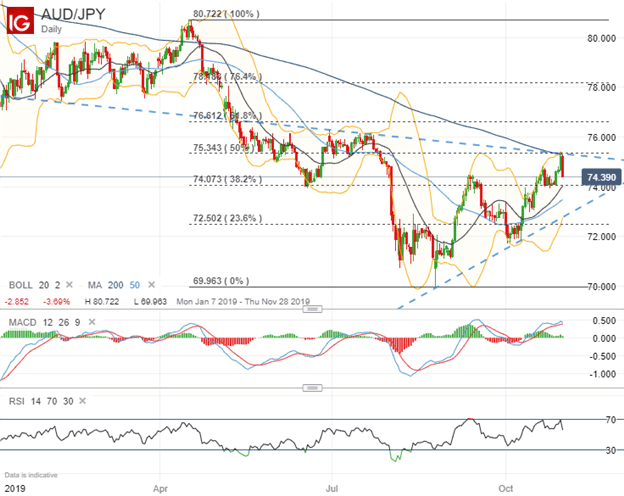 Similarly, spot AUD/JPY could be embarking on a bearish reversal after kissing its 200-day SMA. Confluent resistance near the 75.000-75.500 zone underscored by the mid-point retracement of AUD/JPY’s 2019 trading range also speaks to this intimidating technical level that looks likely to hinder further upside progression by the Australian Dollar.

Moreover, the Aussie just ricocheted off its upper Bollinger Band and the ongoing squeeze could suggest that the recent rally in spot AUD/JPY may have run out of steam. This is also suggested by the relative strength index reversing lower after inching into overbought territory with a reading of 70. Although, confluent support is evident at the 74.000 handle and could keep the Australian Dollar afloat.

Although, we typically take a contrarian view on client sentiment and thus might suggest that AUD could head lower against its USD and JPY counterparts. Check out the comprehensive IG Client Sentiment Report for detailed information on retail forex trader positioning on AUD/USD, AUD/JPY as well as several other currency pairs, commodities and equity indices.