The US Dollar spiked higher right after the Federal Reserve revealed another 25-basis point interest rate cut as expected – its third in a row. The FOMC decision comes as little surprise, however, seeing that overnight swaps were pricing in a rough 95% probability that the Fed would cut rates again prior to the October meeting. The US central bank’s benchmark interest rate – the Federal funds rate (FFR) – now sits at a target range of 1.50-1.75%.

While it might be expected that the US Dollar would fall following an interest rate cut from the Fed, the move was largely priced in already. Furthermore, the latest FOMC statement cut out dovish language previously detailed in the September Fed meeting press release. Specifically, the Fed removed that it would “act as appropriate to sustain the expansion,” which is being interpreted as a firmer monetary policy stance and creating uncertainty over the market’s priced in rate cuts for December and beyond. 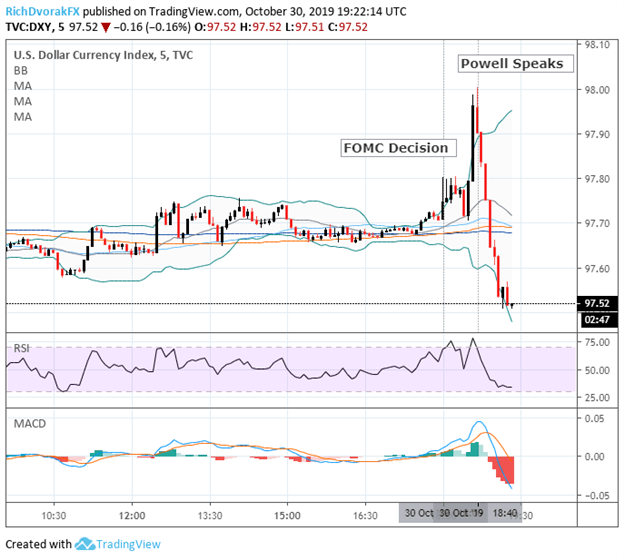 The DXY Index – a popular basket of major US Dollar currency pairs heavily weighted toward EUR/USD – jumped higher following the latest FOMC decision. Though commentary from Fed Chair Powell during the follow-up press conference sent the US Dollar whipsawing lower. 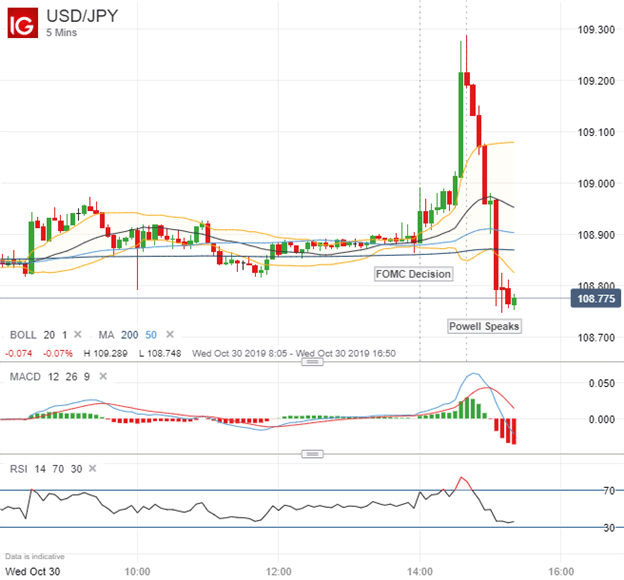 USD/JPY spiked to session highs following the latest FOMC rate cut as expectations for further easing from the Fed grows less likely, but quickly pivoted back down to session lows as Fed Chair Powell provided further details on the central bank's latest stance on monetary policy. 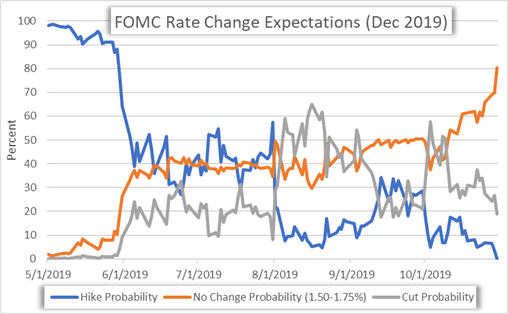 Minutes prior to the October Fed decision, rate traders were pricing in a 30.7% probability that the FOMC would cut rates for a fourth consecutive meeting down to a target FFR range of 1.25-1.50%. As markets digested the FOMC press statement and Fed Chair Powell commented further on the central bank’s latest monetary policy update, however, the probability of another 25-basis point rate cut before the end of the year dropped to a mere 18.8% chance.

Powell detailed that he and the FOMC believe that the current positioning of monetary policy ‘is in a good place.’ This is of course predicated on the assumption that actual data and the US economy will evolve in line with central bank’s most recent economic projections. Fed Chair Powell said how interest rates are currently at an accommodative level with the real FFR ‘probably modestly below zero.’

Furthermore, the head central banker stated that the Fed’s outlook on the US economy is for moderate growth close to 2%. Powell added that the household sector has been strong and how consumers remain healthy. Likewise, the Fed Chair highlighted the positive shift in risk trends recently and referenced the reduced risk of no-deal Brexit and receding US-China trade tensions.

Powell commented on robust labor market gains and how it is the reason the Fed hopes to sustain the expansion. He also noted how low initial jobless claims data is showing a positive sign that the employment backdrop remains on a solid foundation. Though the US Dollar began to reverse quickly when Powell mentioned FOMC officials are not considering raising rates right now and added how inflation seems to be struggling to hit the central bank’s 2% symmetric target. The reversal in USD price action was exacerbated following remarks on the importance of boosting reserves up to $1.5 trillion.