The US Dollar ripped then dipped during Wednesday’s trading session as forex traders digested conflicting messages out of the October Fed meeting. The Federal Reserve slashed its benchmark interest rate by 25-basis points for a third consecutive meeting to a new target range of 1.50-1.75%.

Yet the central bank’s latest action was largely priced in by markets prior to today and the removal of dovish language from the FOMC press statement initially sent the US Dollar climbing higher.

Gains in the greenback were short-lived, however, as USD price action whipsawed lower following remarks from Fed Chair Jerome Powell who stressed the importance of boosting bank reserves (i.e. organic balance sheet growth via Treasury purchases in the repo market). 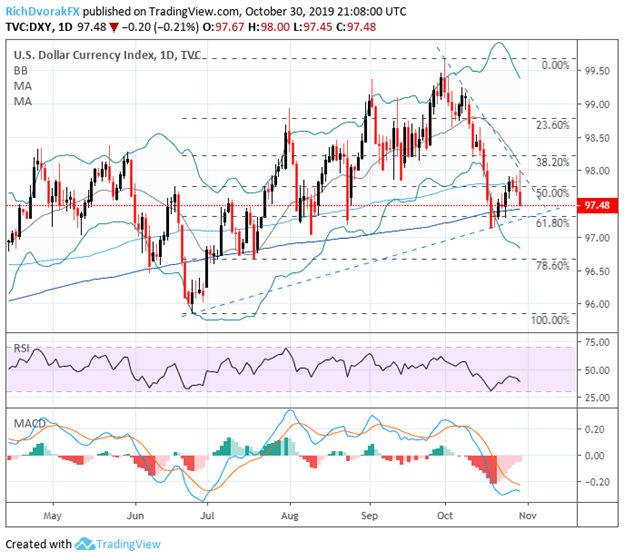 The US Dollar is on pace to close at session lows judging by performance in the DXY Index – a commonly referenced basket of major USD currency pairs. An extension to the downside was noted as a possibility in this US Dollar Price Volatility Report published earlier in the week after the DXY’s recent rebound was rejected at technical resistance underpinned by the 100-day simple moving average.

Now, the US Dollar Index is currently approaching its 200-day simple moving average slightly below the 97.50 price level and could look to keep the greenback afloat. This area of confluent support is also highlighted by the 61.8% Fibonacci retracement of the US Dollar’s trading range since June.

As mentioned earlier, the US Dollar was sent on a rollercoaster ride in response to the latest FOMC decision and Powell press conference. On balance, relatively firm interest rate outlook from Federal Reserve officials detailed in the September Fed meeting minutes was underscored with the omittance of “will act as appropriate to sustain the expansion” and interpreted as a shift away from dovish guidance. Nevertheless, Powell stated that the FOMC would respond if the fundamental backdrop deteriorates further of the Fed’s outlook changes materially.

Also contributing to the reversal lower in the US Dollar could be attributed to remarks from Fed Chair Powell who stressed the importance of beefing up bank reserves and organically growing the central bank’s balance sheet through repo operations. I previously detailed how the US Dollar could drop as the Fed’s balance sheet balloons on a similar magnitude of past quantitative easing programs.

That said, the US Dollar could still be in store for quite a bit of volatility considering high-impact event risk on deck for the rest of the week (detailed on the DailyFX Economic Calendar), though 1-week implied volatility figures for the major US Dollar currency pairs have receded slightly on balance with the October Fed meeting now in the rearview.

Following up the latest Fed decision and Q3 US GDP report, focus now shifts toward upcoming data on inflation, jobs and manufacturing. The latest reading on the Fed’s preferred measure of inflation – core CPE – is slated to cross the wires Thursday at 12:30 GMT while October nonfarm payrolls and ISM manufacturing PMI and employment figures are expected to be released during Friday’s trading session at 12:30 GMT and 14:00 GMT respectively.