Today brought the FOMC’s October rate decision and a cut had been long expected at this meeting, likely explaining the meager initial move that showed after the statement dropped at 2pm. The Federal Reserve cut rates by 25 basis points, marking the third such move over the past three meetings. The Dollar began to gain during the accompanying press conference, pushing back up to a key area of resistance on the chart; after which sellers pounced to push USD right back down.

The big question at this point is what’s next? In the most recent Summary of Economic Projections in September, the FOMC had said that they saw as many as one more cut in 2019. Well, that happened today and there’s one more Fed meeting this year, so questions abound about what might happen at that final 2019 rate decision. At today’s press conference accompanying the rate decision, FOMC Chair Jerome Powell seemed to indicate that the bank was in a wait-and-see mode before committing to any future moves, and focus around the Fed now moves to the December rate decision.

But before we get to that, there’s more data to work with this week as well as a BoJ rate decision later tonight. On the US data front, tomorrow’s economic calendar brings the Fed’s preferred inflation gauge of PCE and Friday morning brings Non-Farm Payrolls. 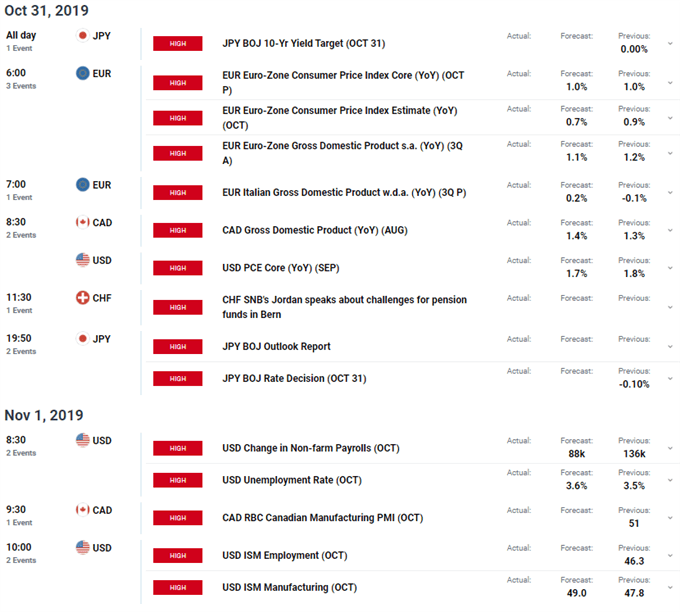 US Dollar Price Action in Precarious Spot Ahead of Big Drivers

The US Dollar has already put in an interesting Q4 and the next couple of days will likely keep the currency on the move. The longer-term backdrop here keeps focus on the bearish side of the currency, as a stark sell-off developed in early-October just after the USD set a fresh two-year-high. That sell-off saw prices tip-below the support side of a longer-term rising wedge formation, which will often be approached for bearish reversals.

Curiously, it wasn’t the Fed or the recent dovish pivot that brought sellers into the mix, as each of those prior FOMC rate cuts were simply shrugged off. Just hours after the July cut, which was the first move of softening out of the Fed in over a decade, the USD pushed up to a fresh two-year-high. The same thing happened weeks after the September cut, and it wasn’t until US data began to dim in early-October trade that short-sellers had a more pronounced effect.

As looked at earlier this morning, the US Dollar had pushed up to lower-high resistance at a key area on the chart. Around today’s FOMC cut, prices initially moved up to re-test a key zone of short-term resistance.

With the late-showing of USD strength during the accompanying press conference EUR/USD sellers began to push-lower on the chart. Support soon showed at a familiar level around 1.1082, which is the 38.2% Fibonacci retracement of the June-October bearish move. The lower-highs that have shown over the past week going along with that horizontal support zone can begin to open the door for bearish scenarios in EUR/USD; and if USD-strength does stick around on the basis of a less-dovish FOMC, the 1.1000 level could be sought for that next stop of key support.

At this stage the FOMC response in GBP/USD has been rather mild and unable to break the recent trend in the pair. Mid-October brought a strong bullish move into the mix as some positive developments showed on the Brexit-front and this helped the pair scale all the way up to the 1.3000 psychological level. Buyers haven’t yet shown much tolerance for prices above that 1.3000 level and since then a bull flag formation had developed. Price action has tip-toed out of that formation, with a bit of follow-through resistance showing around the 1.2900 level.

GBP/USD can remain of interest for short-USD strategies, looking for a re-test of that 1.3000 big figure.

On the long side of the US Dollar, I’ve been following USD/JPY as one of the more attractive possible venues. On the back of that flare of strength in the USD, prices in the pair jumped up to a fresh two-month-high while crossing above the 109.00 level. This keeps the door open for bullish scenarios in the pair, looking for topside targets in the 109.67-110.00 area on the chart. I had discussed this setup at length on webinars over the past two weeks, most recently yesterday to explain some of the backdrop behind levels/zones in the current backdrop on the pair.

Also on the long side of the US Dollar, AUD/USD can remain of interest as the pair remains inside of a key zone of resistance. The pair has seen a strong bearish trend propel prices down to fresh decade-lows in early-August trade. Selling pressure dried up below the .6700 handle, however, and bears have been thwarted on three separate attempts to leave that level behind since then. In early-September, this led to a strong bounce up towards the .6900 handle: In early-October, a similar albeit less-aggressive scenario had shown. Price action is currently testing the 50% marker of the July-August sell-off which is confluent with both the October swing-highs as well as the bearish trend-line projection derived from Sept-Oct highs.

This can keep the door open for short-side scenarios in the pair, particularly should USD-strength stick around after today’s rate decision with so much US data punctuating the economic calendar.