The US Dollar continued its downward spiral that began yesterday subsequent to the ISM manufacturing PMI report crossing the wires, which sparked a resurgence of recession fears and Fed rate cut bets. I noted in my last US Dollar price volatility report that while the greenback’s recent string of strength looked promising, the US Dollar faced daunting risks with respect to this week’s economic data and looming WTO Airbus case ruling.

USD price action moving forward grows increasingly less sanguine, however, as market participants are forced to digest the potential impact of another trade war waged by the US and President Trump. With the USTR formally announcing its intent to move forward with levying tariffs on $7.5 billion of goods imported from the Eurozone effective October 18, EU officials are likely to respond with retaliatory tariffs on US goods. 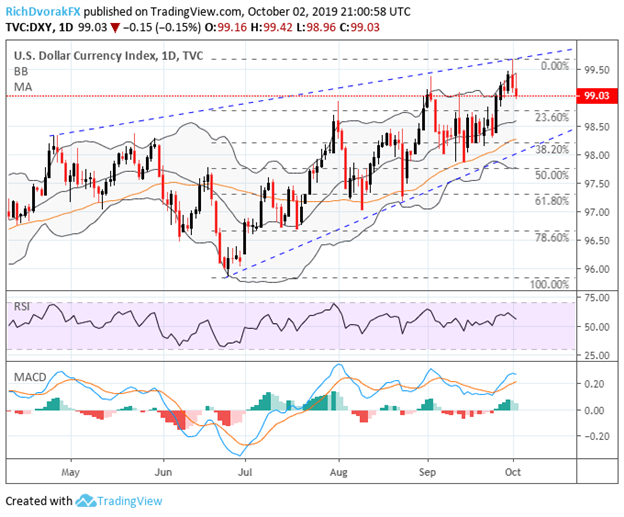 Although FOMC members have reiterated the central bank’s independence from involvement in political affairs – like trade policy – Fed Chair Powell explained during the September Fed meeting press conference that the Fed has “nothing to do with setting trade policy or negotiating trade agreements, we’re supposed to be reacting on behalf of the American economy to support maximum employment and stable prices,” but went on to add that “if, in fact, the economy weakens more, then we’re prepared to be aggressive.”

As one might expect, the prospect of additional Fed rate cuts stands to weigh negatively on the US Dollar. At the same time, however, it is difficult to imagine a scenario on the horizon where the Federal Reserve is providing monetary stimulus and the ECB is not. Also, the US is in a more favorable position than the EU is with respect to economic bandwidth and ability to weather another major fundamental headwind. Correspondingly, the US Dollar – a favorite safe-haven currency – could potentially rise even despite the recent negative developments.

The US Dollar faces another immediate threat, however, with the upcoming ISM Services PMI report slated for release Thursday at 14:00 GMT. If Tuesday’s ISM manufacturing report foreshadows tomorrow’s services report, another major miss will likely accelerate Fed rate cut expectations and send the US Dollar lower. The significance being placed on the upcoming ISM services PMI data is indicated by the high overnight implied volatility readings on USDJPY and USDCHF – two particularly interest rate sensitive USD forex pairs. According to the CME Group’s Fedwatch tool, markets are pricing a 77% probability that the FOMC cuts rates by 25bps for a third consecutive later this month.