The World Trade Organization handed down a ruling Wednesday to conclude a 15-year fight on whether the European Union is subsidizing Airbus, a manufacturer of large aircraft in the EU. The ruling authorizes the United States to levy tariffs up to $7.5 billion on exports from the European Union, which the USTR just formally announced will move forward with imposing. Effective on October 18, the US will slap a 10% tariff on large commercial aircraft and a 25% tariff on other agrigultural and industrial goods imported from the EU.

European stocks ended the day deep in the red as the news compounded on current Brexit dramas, further unsettling market participants. The DAX 30 finished down 2.76%, while the FTSE100 finished in the red by 3.23%. Airbus stock itself closed 2.04% lower Wednesday. 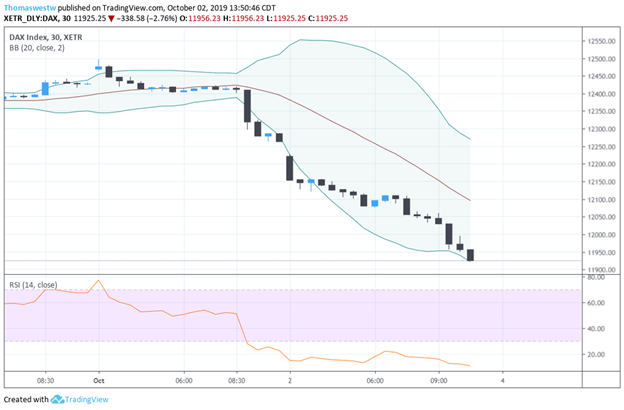 The United States formally issued the complaint to the WTO nine months before the European Union levied their own formal complaint about the United States for subsidizing Boeing. That ruling is expected to be handed down sometime at the beginning of next year. However, the United States could move forward with tariffs before that ruling which many believe would escalate tensions between the US and the world’s largest trading bloc and increase global trade tensions. The Trump administration is also deliberating on section 232 tariffs aimed mainly at European Automobile and parts manufactures, with Trump expected to announce his decision before November 13th on that matter. Section 232 tariffs are authorized under the Trade Expansion Act of 1962 for national security threats and are separate from the WTO.

With the ongoing section 232 investigation and the recent WTO ruling, European officials are in a tight spot. A retaliatory strike outside the WTO, should the US impose tariffs, could open the door for the Trump administration to move forward with the 232 auto tariffs, which would massively increase trade tensions.

Similarly, any indication that the EU will retaliate to the Airbus-related tariffs outside of the WTO’s scope would mark a significant escalation in EU-US trade tensions and could see the conflict spiral into a tit-for-tat affair. As it stands, the WTO’s ruling asserts that the $7.5 billion in tariffs on the EU is “legal,” whereas the section 232 investigation is not backed by the WTO. Therefore, a willingness from the EU to answer back without the WTO’s blessing could open the flood gates for more conflict.

To that end, European officials have brought several retaliatory options to the table, perhaps to increase their perceived leverage. These measures include revoking a 2006 settlement with the United States over tax exemptions for international sales structures that are utilized by Boeing.