The Federal Reserve delivered the widely expected 25-basis point cut to markets on Wednesday, but expectations elsewhere were left unmet as the FOMC announced the central bank would not immediately explore quantitative easing. Further, the Fed’s dot plot revealed officials remain sharply divided over the next rate move with some arguing for deeper cuts as others remain steadfast in their desire for no further action. 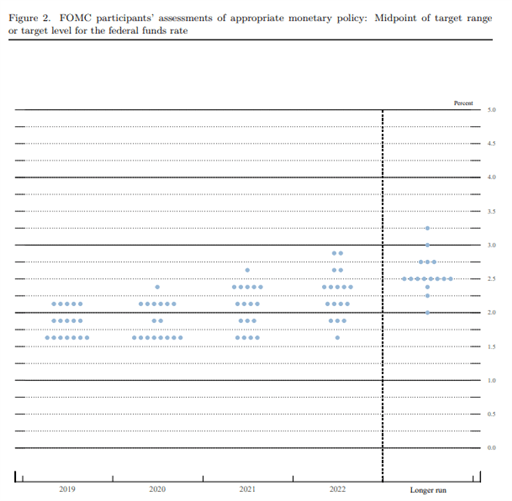 Consequently, the Fed’s long-run dot was left unchanged at 2.5% even as the Fed reiterated its goal to “act as appropriate to sustain the expansion.” Together, the unchanged long-run opinion on interest rates and the willingness to accommodate offered a familiarly uncertain view of future Fed action.

As with prior meetings, Chairman Powell highlighted slower growth abroad and uncertain trade policy as reasons for concern moving forward. “Our views about the path of interest rates that will achieve our goals have changed significantly,” Mr. Powell said. Regarding future policy, “the Fed has to take into account anything that will have material impact on economy, including trade tensions,” he continued.

When questioned if Wednesday’s rate cut was a mere mid-cycle adjustment, the Chairman noted the robust domestic economy but that the Committee would continue to monitor the economy and act to “sustain the expansion.” In pursuit of that goal, he said the Fed could employ a “more extensive sequence of rate cuts” if appropriate.

On the topic of anomalous activity in the repo market, the Chairman said the Fed was well aware of the activity and was monitoring the response. At present, the Committee does not see the strains in the money market impacting the broader economy or their ability to control rates. “If we experience another issue in money markets, we have tools on funding pressures, and we will use them as needed.”

The Potential for Quantitative Easing

Concluding his answer to the previous question, Chairman Powell conceded it was “certainly possible we will need to restart organic growth of the balance sheet sooner than expected.” The willingness of the central bank to explore another round of quantitative easing saw the Dollar forfeit some gains and gold stem its bleed lower. Still, the respective assets maintained most of their initial moves. 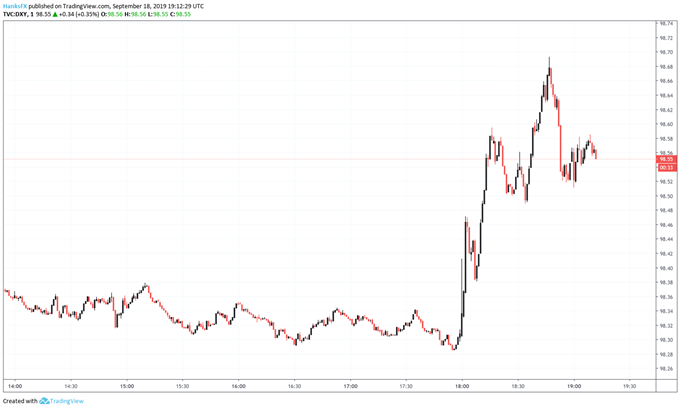 The Real Effects of Trade Uncertainty

On the issue of trade, Chairman Powell said “trade policy is not our game” but admitted it was weighing on growth outlooks and what businesses would like – a clear outline of trade practices. Although the Fed cannot control trade, he noted the Committee’s ability to offer monetary policy tools and ‘look through volatility and react on behalf of economy.” The initial reaction to the statement suggets markets took the willingness as another sign the Fed was open to further accomodation. 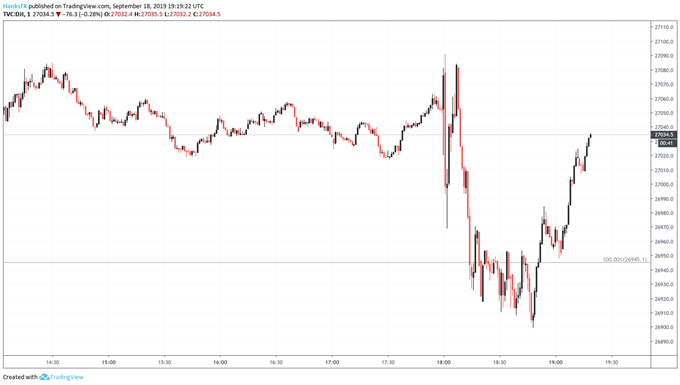 Nevertheless, the lack of consensus over the path ahead could keep markets in a similar trading pattern. In the shorter term, the Dow Jones was able to recover much of its initial losses – trading from 26,900 to 27,010 near the conclusion of the press conference. Looking ahead, markets will have to decide if the willingness to enact accommodative policy outweighs the dot plot that suggests no further action if necessary.

In the meantime, investors will look to upcoming economic data for insight. With a second cut in as many meetings, it may be useful to review prior instances of easing and how gold, oil, the S&P 500 and USD respond.