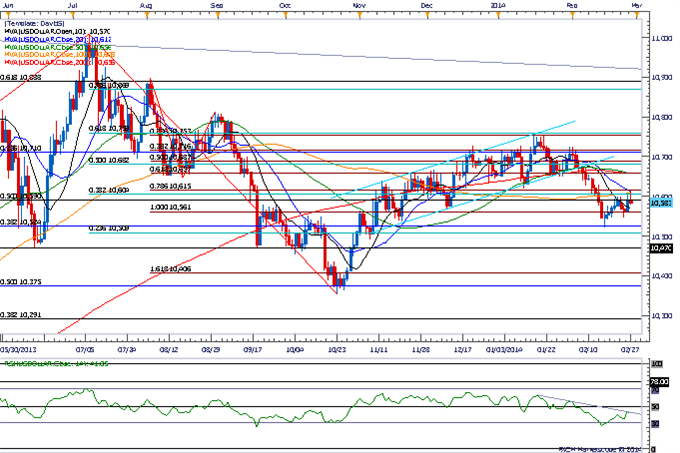 The Dow Jones-FXCM U.S. Dollar Index (Ticker: USDollar) struggled to push back above former support (10,615) despite the better-than-expected Durable Goods Orders report, and the greenback may continue to carve a lower high going into March as the Fed pledges to retain a highly accommodative policy stance even after the 6.5 percent unemployment threshold is achieved.

It seems as though the Federal Open Market Committee (FOMC) will preserve the zero interest rate policy (ZIRP) for an extended period of time amid the recent ‘softness’ in economic activity, and Chair Janet Yellen may sound increasingly dovish over the coming months should the seasonal factors produce a significant downward shift in the economic outlook.

We favor ‘selling bounces’ ahead of the Fed’s March 19 meeting as long as the bearish RSI momentum retains intact, and the USDOLLAR may continue to carve a series of lower highs paired with lower lows should interest rate expectations deteriorate further. 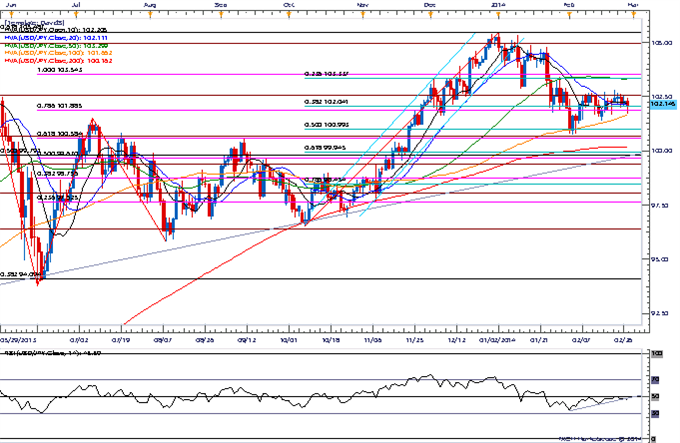 Three of the four components gained ground against the greenback, led by a 0.22 percent rally in the Japanese Yen, and the policy outlook may continue to heighten the appeal of the low-yielding currency as the Bank of Japan (BoJ) refrains from expanding its asset-purchase program.

Indeed, BoJ board member Takehiro Sato warned that the central bank may halt its easing cycle even before the 2 percent inflation target is achieved amid the lagging effects of monetary policy, and the USDJPY remains at risk for a larger correction as it continues to carve a lower high around the 102.50 region.

With that said, the downside break in the RSI paired with a close below the 102.00 handle should provide confirmation as well as conviction for additional dollar-yen weakness, and the pair may ultimately threaten the bullish trend from back in 2013 should we see a growing number of BoJ officials scale back their dovish tone for monetary policy.