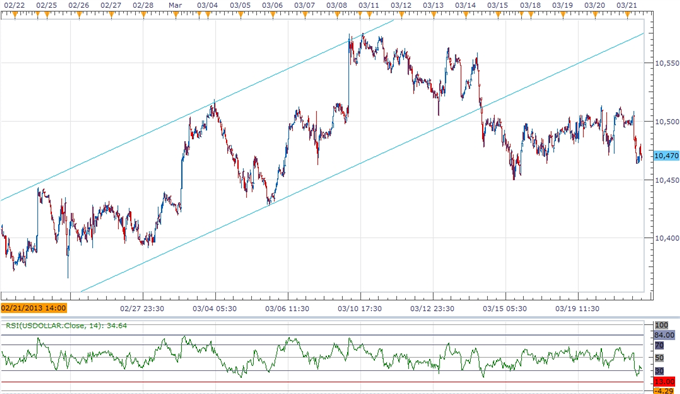 Although the Dow Jones-FXCM U.S. Dollar Index (Ticker: USDollar) remains 0.36 percent lower from the open, we’re seeing the greenback maintain the range-bound price action from earlier this month, and the reserve currency looks poised to track higher going into the end of the week as the 30-minute relative strength index bounces back from oversold territory. Although the FOMC interest rate decision failed to heighten the bullish sentiment surrounding the greenback, Chairman Ben Bernanke sounded a little more upbeat this time around as the central bank lowered its outlook for unemployment, and the reserve currency may continue to build a short-term base around the 10,450 region as the Fed takes note of the more broad-based recovery in the U.S. In turn, we will look for further advances in the USDOLLAR, and the developments coming out of the world’s largest economy may continue to increase the appeal of the greenback as the economic recovery gradually gathers pace. 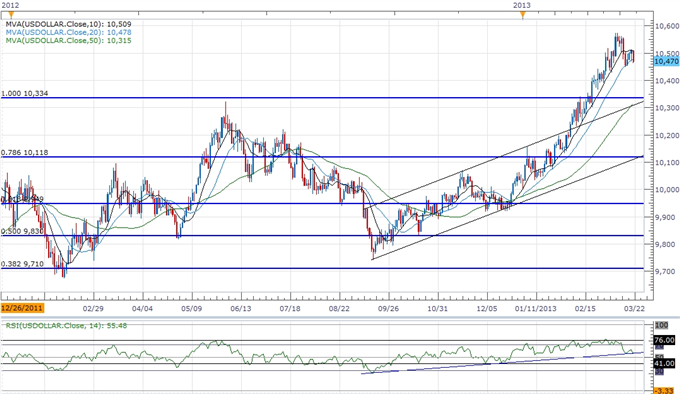 Although U.S. Existing Home Sales increased 0.8 percent in February amid projections for a 1.6 percent print, the Philadelphia Fed survey advanced to 2.0 in March to mark the first positive reading since December, and the economic docket for the following week may trigger another short-term bounce in the dollar as the final 4Q GDP report is expected to show the growth rate increasing 0.5 percent versus an initial forecast for a 0.1 percent rise. As the daily relative strength index preserves the upward trend carried over from the previous year, the reserve currency looks poised for another run at the 10,600 figure, and the dollar may continue to outperform over the coming months as the U.S. gets on a more sustainable path. However, a bearish break in the RSI may produce a larger correction in the index, and we may see the dollar work its way back towards the 10,400 figure to test for psychological support.

Three of the four components gained ground against the greenback, led by a 0.92 percent rally in the Japanese Yen, which was following by a 0.57 percent advance in the Australian dollar. Indeed, the larger-than-expected expansion in China manufacturing has helped to increase the appeal of the higher-yielding currency, and the rebound in the Australian dollar may gather pace in the coming days as the relative strength index on the AUDUSD clears interim resistance around the 59 figure. As the aussie-dollar climbs back above the 61.8 percent Fibonacci retracement from the 2011 high to low (1.0430), we may see the pair threaten the downward trend dating back to the record-high (1.1079), but the near-term correction may be short-lived as the Reserve Bank of Australia (RBA) keeps the door open to push the benchmark interest rate to a fresh record-low. With regards to the RSI, we will now be looking at the 67 figure for resistance, and we may see the AUDUSD preserve the broad range carried over from the previous year as the central bank sticks to the sidelines.