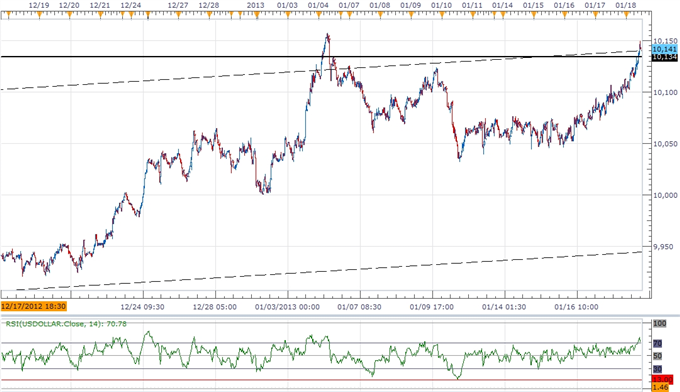 The Dow Jones-FXCM U.S. Dollar Index (Ticker: USDollar) is trading 0.50 percent higher from the open after moving 124 percent of its average true range, and the greenback looks poised to appreciate further over the near to medium-term as the more robust recovery in the world’s largest economy dampens the Fed’s scope to expand its balance sheet further. Indeed, the shift in the policy outlook should keep the upward trend intact, but the dollar remains poised for a short-term correction as the rally from earlier this year appears to be overdone. As the 30-minute relative strength index falls back from overbought territory, a move back below 70 should spark a more meaningful move to the downside, and we will look for a move back towards the 10,050 region as it holds up as interim support. In turn, we will look to buy dips in the dollar, and we will preserve our bullish forecast for the greenback as the Fed softens its dovish tone for monetary policy. 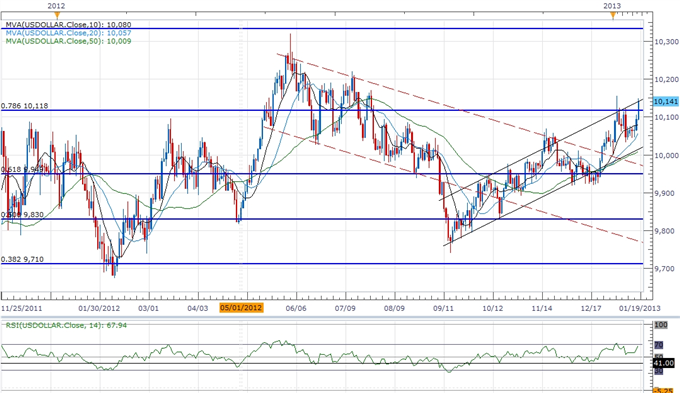 Despite the positive developments coming out of the U.S. economy, Atlanta Fed President Dennis Lockhart sees the FOMC carrying its open-ended asset purchase program into the second-half of 2013 as the central bank adopts a ‘qualitative approach’ for monetary policy. However, as a growing number of central bank officials take note of the resilience in private sector consumption along with the budding recovery in the housing market, we may see the Fed start to discuss a tentative exit strategy in the months ahead, and we will look for future opportunities to buy the dollar as the Fed faces limited scope to implement additional monetary stimulus. As the USDOLLAR comes up against trendline resistance, with the RSI approaching overbought territory, we will wait for a correction to pan out before taking long position on the U.S. dollar.

The greenback rallied across the board, led by a 0.73 percent decline in the British Pound, while the Australian dollar shed 0.49 percent as employment in the $1T economy unexpectedly weakened 5.5K in December. As the region faces an uneven recovery, we should see the Reserve Bank of Australia (RBA) take additional steps to stem the downside risks for growth and inflation, and Governor Glenn Stevens may show a greater willingness to deliver another rate cut at the February 4 meeting as China – Australia’s largest trading partner – continues to face a risk for a ‘hard landing.’ According to Credit Suisse overnight index swaps, market participants still see the RBA lowering the cash rate by nearly 50bp over the next 12-months, and the recent pullback in the AUDUSD may turn into a larger move to the downside as the fundamental outlook for Australia remains titled to the downside.