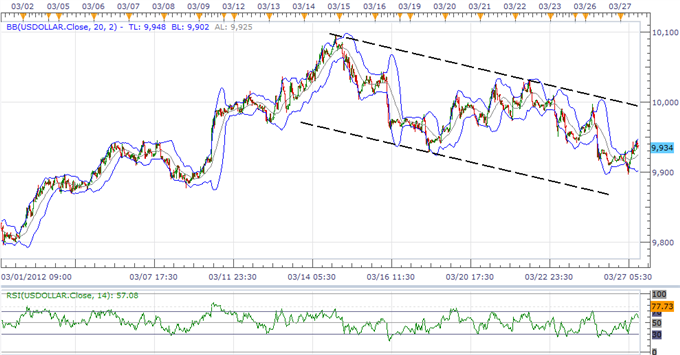 The Dow Jones-FXCM U.S. Dollar Index (Ticker: USDollar) is 0.21 percent higher from the open after moving 73 percent of its average true range, and the rebound from 9,896 should gather pace going into the middle of the week as risk sentiment wanes. In turn, we may see the dollar work its way back towards 10,000, but the greenback may face a short-term correction as the 30-minute relative strength index approaches overbought territory. As the downward trending channel takes shape, the dollar could be carving a lower high going into the middle of the week, and we may see the reserve currency track lower in April as market participants raise bets for more quantitative easing. 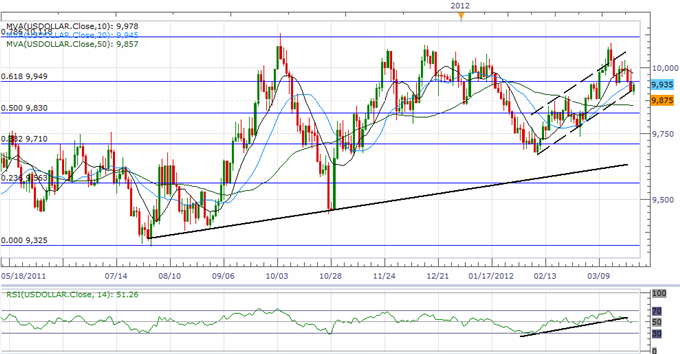 Despite the dovish rhetoric from Fed Chairman Ben Bernanke, New York Fed President William Dudley, who’s also a permanent member of the FOMC, struck an improved outlook for the U.S. as he expects the economy to grow ‘at a moderate pace,’ and it seems as though the committee will preserve a wait-and-see approach throughout 2012 as central bank officials take note of the more robust recovery. As the USDOLLAR threatens the upward trending channel from earlier this year, the greenback may have carved out a top in March, but we may see the reserve currency continue to retrace the decline from earlier this month should Fed policy makers talk down speculation for QE3. However, as the relative strength index fails to maintain the upward trend, the lack of momentum to push back above the 61.8 percent Fibonacci retracement could ultimately produce a move back towards the 50.0 percent Fib, and we may see the dollar consolidate over the near-term as market participants weigh the outlook for monetary policy.

Three of the four components weakened against the greenback, led by a 0.39 percent decline in the Australian dollar, while the Japanese Yen lost another 0.36 percent against its U.S. counterpart, with the USDJPY advancing to a fresh weekly high of 83.37. As the Bank of Japan pledges to meet the 1 percent target for inflation, the central bank is widely expected to ramp up its asset purchase program throughout 2012, and the dovish tone held by the BoJ should continue to prop up the dollar-yen as the Fed looks to bring its easing cycle to an end. The shift in the policy outlook will continue to influence the USDJPY, and the exchange rate should continue to track higher over the near-term amid the deviation in interest rate expectations.