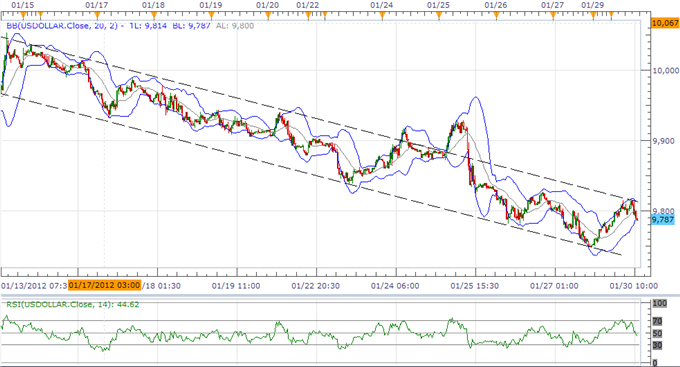 The Dow Jones-FXCM U.S. Dollar Index (Ticker: USDollar) remains 0.40 percent higher on the day after moving 90 percent of its average true range, and it seems as though the greenback will consolidate over the next 24-hours of trading as it maintains the downward trending channel from earlier this month. As the 30-minute relative strength index falls back from a high of 71, we may see the index hold the narrow range between the 20-period Bollinger Bands, but the rebound from 9,747 looks poised to gather pace ahead of the Henry Hawkins testimony as the Fed continues to soften its dovish tone for monetary policy. 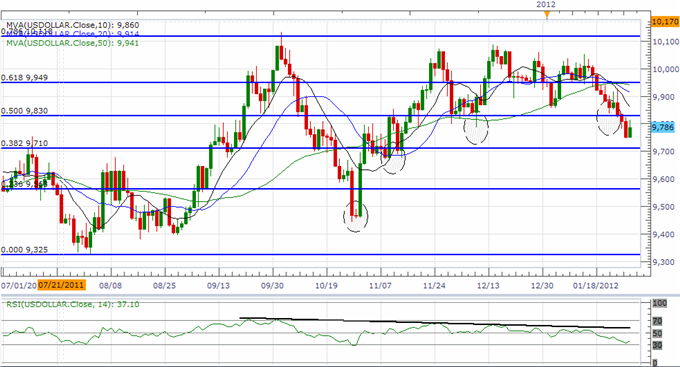 As the USDOLLAR struggles to push back above the 50.0 percent Fibonacci retracement around 9,830, the reserve currency may track sideways in the coming days, but the greenback may appreciate further in the coming days should we see Fed Chairman Ben Bernanke talk down speculation for another large-scale asset purchase program. Indeed, Philadelphia Fed President Charles Plosser struck a rather hawkish tone for monetary policy, stating that the zero interest rate pledge ‘is contingent on the evolution of the economy,’ and he went onto say that the statement ‘shouldn’t be interpreted as a commitment’ as the recovery in the world’s largest economy gradually gathers pace. As the economic docket on tap for this week is expected to highlight an improved outlook for the U.S., Mr. Bernanke may strike a rather neutral tone for monetary policy, and the central bank head may endorse a wait-and-see approach throughout 2012 as the risk of a double-dip recession subsides.

The greenback advance against three of its four counterparts, led by a 0.80 percent decline in the Euro, while the Japanese Yen continued to outperform against its major counterparts, adding another 0.45 percent on Monday. As the USD/JPY falls back towards 76.00, there’s speculation that Japan’s Ministry of Finance will step into the foreign exchange market once again to dampen the appeal of the low-yielding currency, but the dollar-yen may continue to give back the rebound from 75.50 as retail traders remain heavily long against the pair. As the DailyFX Speculative Sentiment Index for the USD/JPY currently stands at 13.31, the buildup in long positions suggest that the exchange rate will continue to push lower over the near-term, and we may see the exchange rate slip to a fresh record-low before the government steps up it effort to stem the marked appreciation in the local currency.