US Dollar Faces Bearish Fundamental Headwinds from the Fed & Trade

USD price action just recorded back-to-back weekly gains according to performance recorded by the US Dollar Index (DXY). The US Dollar has churned about 1.5% higher so far this year, which follows the Greenback’s 3.5% drift lower from October 03 to December 31 that marked a 5-month low.

Future potential upside in the US Dollar could be limited, however, with USD price outlook lacking bullish conviction in light of dissipating fundamental catalysts that have previously helped propel the US Dollar higher.

A pertinent theme likely contributing to the US Dollar’s dominance last year was demand for safe-haven currencies, though this has faded over the last few months alongside perceived recession risk. 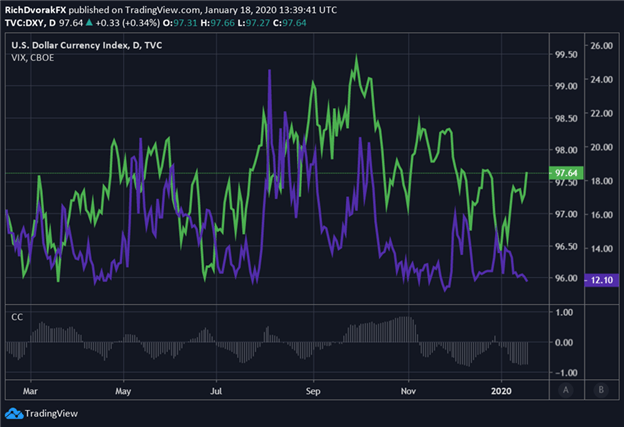 The unwinding of priced recession probabilities and corresponding retracement in market uncertainty – or volatility – likely explains ebbing USD demand and the string of weakness recorded by the US Dollar throughout 4Q-2019.

This has been driven primarily by the down-throttled trade war between the United States and China, which just produced tangible fruit in the form of a phase one trade deal signed last week by US President Trump and Chinese Vice Premier Liu He.

Measures of volatility have, in turn, edged lower amid increasingly upbeat market sentiment. In fact, currency volatility has slumped back to historic lows as gauged by the JPMorgan Global FX Volatility Index. That said, the USD could soon come under pressure relative to other major currency pairs once more with risk appetite bulging and volatility remaining suppressed. Another fundamental force that frequently strongarms the direction of the US Dollar is the Federal Reserve. In addition to slashing interest rates by 75-basis points last year, the Fed resumed growth of its balance sheet – albeit ‘organically’ and is ‘not to be confused with QE’ according to Chair Jerome Powell.

The Federal Reserve has steadily expanded its balance sheet since September 2019 and the central bank just announced last week that it intends to keep its printing press greased up for at least another month. Specifically, the New York Fed district bank confirmed it will extend its overnight repo and term repo operations until February 13.

The FOMC has already injected a staggering $415 billion of liquidity (i.e. supply of USD) into the financial system since US Dollar funding pressure sparked Fed action last year. That said, the Fed will maintain its daily cap on overnight repo operations at $120B and offer up to $30 billion on its term repo offerings but will keep the current cap of $35 billion through month-end. 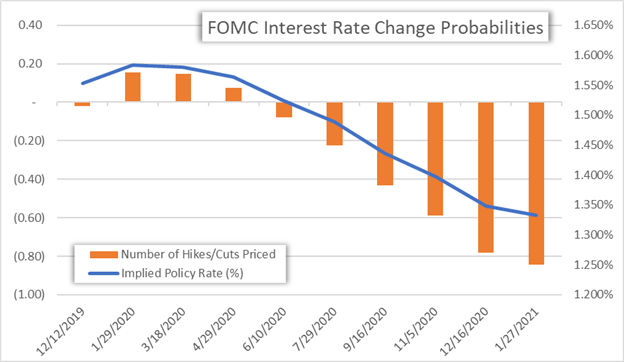 While on the topic of the FOMC, the futures-implied probability of an interest rate change at the central bank’s January 29 meeting has experienced a notable reversal from a dovish to hawkish tilt since the December Fed meeting.

As for fundamental economic data, USD bulls were quick to overlook discouraging wage growth figures and a worse-than-expected reading on the latest headline CPI reading when strong housing starts data crossed the wires. Housing starts soared nearly 17% in December to a 13-year high and is an encouraging sign for the sustainability of the longest US economic expansion in history.

While that datapoint is definitely a positive for the American economy, the enthusiastic response in the US Dollar seemed a tad overdone considering the latter two economic indicators likely hold greater credence with regard to their relative impact on monetary policy decisions from the Federal Reserve.

In light of a sparse economic calendar for the week ahead, forex traders may direct their attention toward the 2020 World Economic Forum annual meeting with keynote speeches from Donald Trump, Angela Merkel and Christine Lagarde on the docket alongside many other global leaders.

On that note, US President Trump will likely tout his freshly inked trade deal with China, which could provide another positive jolt to risk appetite – often a bearish USD headwind.

Additionally, head of the European Central Bank – Christine Lagarde – is expected to detail the ECB monetary policy strategy review on January 23, which could send spot EUR/USD and the broader US Dollar Index swinging in response to any shocking announcements.