USD: Over the past 24 hours eyes have been on short term interest rates after repo rates surged to its highest level this year in yesterday’s session as corporates withdraw cash in order to make quarterly tax payments, which had also coincided with the settlement of coupon bearing treasuries. However, this morning looks to be more of the same with repo rates surging 10%, highest level in several years, which in turn could prompt the Fed to cut the IOER yet again this week in order to ease US Dollar funding pressures or announce repo operations if funding pressures become more material. Repo and reverse repo agreements 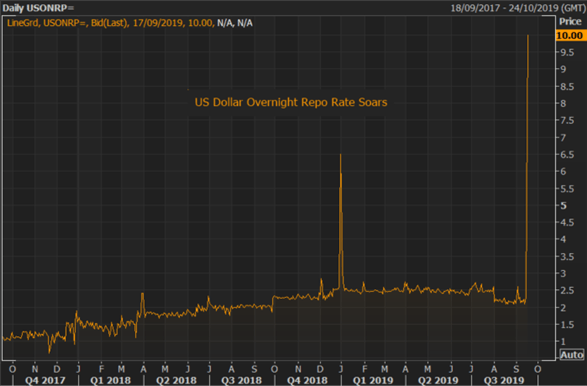 EUR: Marginal gains for the Euro this morning, up 0.2% against the USD. An improvement from worse to bad in the German ZEW survey data has also provided a helping hand for the Euro, in which institute noted that while the outlook remains negative, the bounce back had stemmed from the fact that strong fears over a sharp trade war escalation did not come to pass. Elsewhere, sizeable option expiries have kept EUR/USD relatively rangebound with 2.3yards between 1.1000-1.1050.

SEK: On September 5th, the Riksbank’s announced its decision to maintain its guidance that it will raise rates at the turn of the year had been questioned by market participants amid the underperformance in the Swedish economy. Following today’s meeting minutes, it also appears to have been questioned by the rate setters themseleves with Per Jansson expressing conerns over inflation, therefore casting doubts on the central banks forecast. These doubts are likely to have grown louder after today’s labour market report, showing that the unemployment rate rose above expectations to 7.1% and 7.4% on a seasonal adjusted basis, which is notably above the Riksbank’s 2019 forecast 6.6%. Consequently, SEK is the underperformer in the G10 complex with weakness likely to remain appropiate amid a potential for the Riksbank to rethink their outlook. 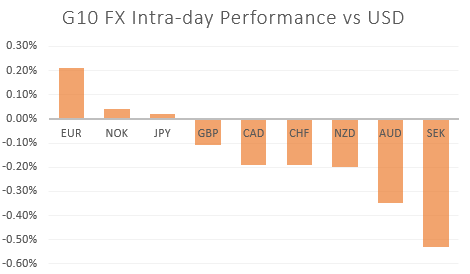