Sterling (GBP) Price Outlook: Brexit, Prorogation and BoE All in The Mix

Brexit, Prorogation and the Bank of England

A busy week for Sterling traders with Brexit news and the latest Bank of England policy decision the main drivers of price action. Add in the latest inflation data and Sterling is likely to be volatile all week.

UK PM Boris Johnson is in Luxembourg today (Monday) to meet with European Commission President Jean-Claude Juncker for Brexit talks with Brexit negotiator Michel Barnier also in attendance. According to various media outlets, PM Johnson will reiterate that the UK will leave the EU on October 31 with or without a deal, despite the UK Parliament recently passing a law making it illegal to leave without a deal. Other media outlets are saying that a deal is inching closer between the two sides, with progress being made on the Irish border, although this rhetoric has been repeated over the last few weeks with no concrete plans yet provided by the UK.

On Thursday, the Bank of England are expected to leave UK interest rates unchanged at 0.75% against a backdrop of firming UK economic data. Recent monthly GDP data suggest that the UK economy will not contract in Q3, while strong wages and jobs data would normally point to higher interest rates in the coming months. Ongoing Brexit talks will stay the BoE’s hand on Thursday and BoE governor Mark Carney is expected to highlight this once again.

GBPUSD has pared last week’s gains and currently trades around 1.2435 after having broken above 1.2500 on Friday last week for the first time since July 25. The recent series of higher lows should provide some support for GBPUSD this week, while a recent cluster of highs and lows around the 1.2382 area should also prove supportive in the short-term. 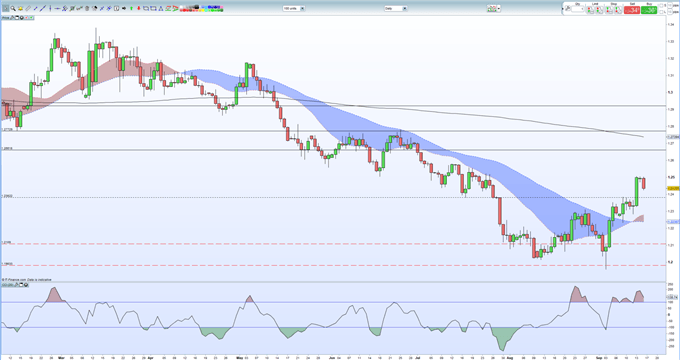 We are continually looking to improve our service and your views can help us. Please let us know what you think via our Short Online Survey Here.

What is your view on Sterling and Brexit? You can let us know via the form at the end of this piece or you can contact the author at nicholas.cawley@ig.com or via Twitter @nickcawley1.