The US Dollar continues to edge higher into the new year with the DXY Index nearly rising a full percentage point from the 96.50 mark to 97.30 where the benchmark trades currently.

Looking ahead, the US Dollar stands to respond predominantly to closely watched economic indicators due for release over the coming trading sessions such as nonfarm payrolls due Friday, January 10 at 13:30 GMT and inflation due next Tuesday, January 14 at 13:30 GMT.

Another driver of USD price action moving forward could focus on the latest insight found in the New York Fed’s upcoming schedule revision for overnight and term repurchase agreement operations, which is expected early next week. 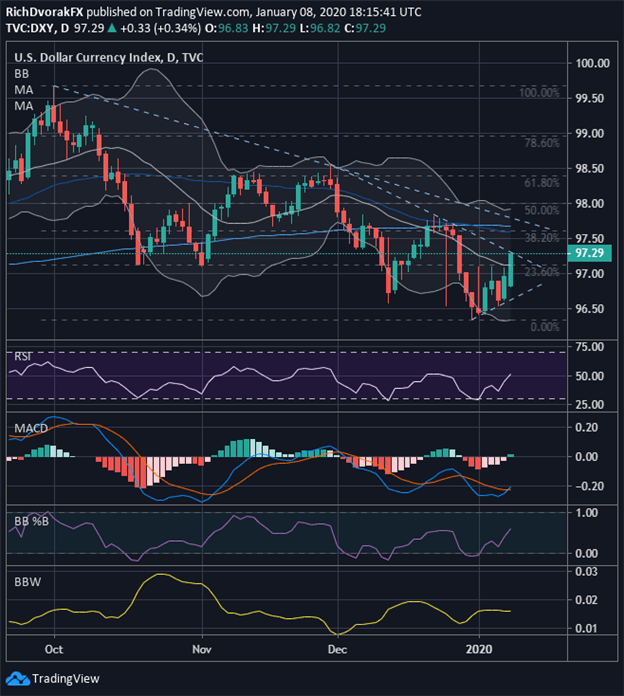 With the US Dollar on pace to record a 0.35% gain for today’s trading session, the DXY Index has eclipsed its first area of confluent resistance around the 97.00 handle. This technical level is roughly underpinned by the 23.6% Fibonacci retracement of the Greenback’s bearish leg etched out since early October.

The recent rise in USD price action faces another nearside technical obstacle, however, and is noted by the short-term downtrend line extended from the November 29 and December 23 intraday highs.

That said, the US Dollar may continue to rise in light of constructive technical developments like positive divergence on the MACD and RSI. Topping the aforementioned trendline of resistance could see the DXY Index quickly target its 50-day simple moving average and 38.2% Fib slightly above the 97.50 price level. 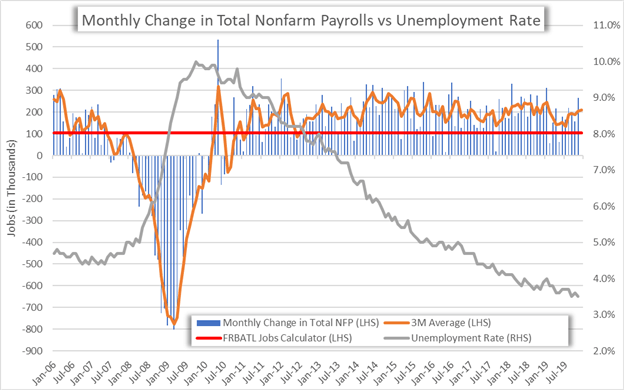 Shifting attention back to fundamental catalysts that have serious potential to sway USD price action we find that the US economy is expected to have added 162K jobs in December measured by the net monthly change in total nonfarm payrolls (NFP). The data will be compared to the November NFP report that detailed a stellar 266K gain for the headline jobs figure.

It is also worth keeping in mind that the US labor market needs to average only 105K job additions each month over the next 12-months to hold the unemployment rate steady at its current 3.5% level, which matches the most recent projection estimate from FOMC officials for 2020. Furthermore, better-than-expected ADP employment data released earlier today (detailed on the DailyFX Economic Calendar) could foreshadow the upcoming NFP report slated for Friday. 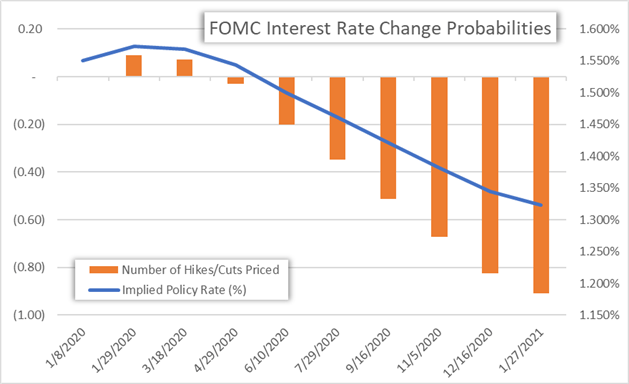 Correspondingly, forex traders could be forced to further unwind their expectations for future dovish action from the Federal Reserve if provided with additional evidence of a healthy US jobs market and strong consumer. According to the latest overnight swaps data, futures traders are currently pricing in another 25-basis point interest rate cut from the Fed by the central bank’s meeting next January. 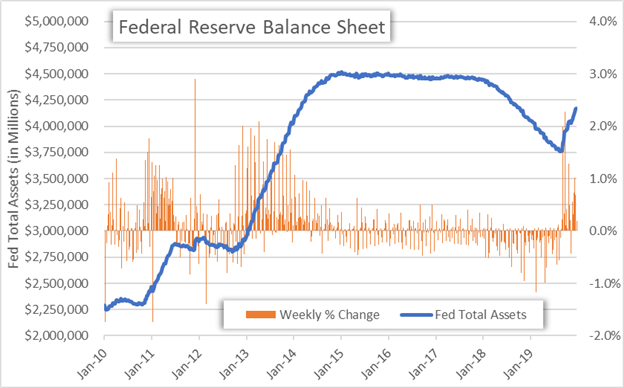 Last but not least, changes in the size of the Federal Reserve’s balance sheet could have a significant impact on the direction of the USD price action. The FOMC has added over $400 billion in total assets via reverse repo operations since the end of August in aims of combatting sustained US Dollar funding pressure.

On that note, the US Dollar may continue to face headwinds stemming from the New York Fed pumping liquidity (i.e. supply of US Dollars) into the financial system at a similar magnitude of past quantitative easing (QE) cycles in the aftermath of the Global Financial Crisis.

Take a look at this insight on how to trade the Top 10 Most Volatile Currency Pairs. Options-implied trading ranges are calculated using 1-standard deviation (i.e. 68% statistical probability price action is contained within the implied trading range over the specified time frame).