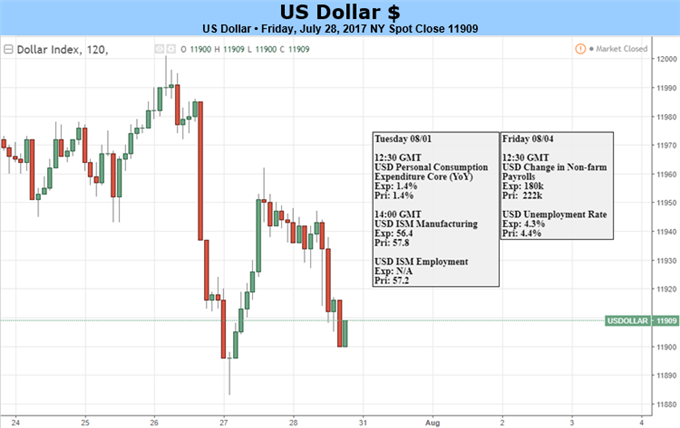 This was a rather busy week for U.S. drivers, with the bulk of attention being focused on the latter portion of the week. On Wednesday, we heard from the Federal Reserve for their July rate decision; and then a couple of pieces of high-impact data on Thursday and Friday kept the Greenback on the move. The net takeaway at this point has been another extension of USD-weakness as the currency crossed the 10% marker for its move-lower in 2017. After setting a fresh 14-year high on just the second day of trading in the New Year, bears have been in charge as USD is now sitting at fresh one-year lows while losing -10.2% of its value from that point to the low set after FOMC.

The big driver for this week seemed to emanate from the Federal Reserve’s statement accompanying the rate decision. There was no press conference, and no updated forecasts; but in the Fed’s statement the bank mentioned that balance sheet reduction may begin ‘relatively soon’. This was largely inferred to mean their next meeting on September 20-21, and while the Fed has said previously that they anticipate invoking balance sheet reduction while also continuing to normalize rates, markets don’t appear to be buying that thesis just yet. U.S. data remains rather soft, and the Fed even voiced concern about lackluster inflation in that statement on Wednesday; and this makes for a difficult environment for tighter operating conditions, much less tightening on dual fronts with both higher rates and balance sheet reduction.

The current issue revolving around the Dollar’s price action is just how far it’s moved in 2017. As we remain pinned down near one-year lows, USD is oversold on a variety of metrics, and sentiment has posed a dramatic downshift in 2017 as speculators have abandoned the long-Dollar thesis that was so commonplace as we came into the year. This is relevant – because prices move based on supply and demand as opposed to directly responding to fundamentals. While fundamentals can drive supply and demand, a market that is light on supply because anyone that might want to sell is already short can be vulnerable to spikes-higher as positive data begins to show.

On that topic of data – we discussed this as we came into July and this theme is still very much alive: U.S. data has been a large disappointment so far in 2017, and this, combined with the Fed’s focal shift towards the balance sheet – is likely the primary culprit for the aggressive move-lower in the Dollar. As we came into the year flying-higher on the back of the reflation trade, with the U.S. Dollar setting a fresh 14-year high on the second day of trading, expectations for economic growth in the United States were continuing to improve. But the actual data that we’ve seen so far in 2017 has been largely a disappointment; and with expectations being cyclical in nature like many other market factors, outlooks around future data prints have been moving-lower in response, making it easier for positive data to show-up against a diminished range of expectations.

This week saw a quick blip of strength develop in the Dollar the morning after that rate decision; and this was on the back of the release of U.S. Durable Goods numbers that came-in rather strong. But on Friday morning, a lackluster GDP release with some rather large revisions for prior quarters brought the bears back, and prices tumbled back-down towards that recently set low. Next week brings a few high-impact data points, two of which are expected to be very important: Tuesday morning brings year-over-year PCE up to the month of June, and Friday morning brings Non-Farm Payrolls for July. PCE (Personal Consumption Expenditure Price Index) is a key variable relevant to inflation, and this is the Federal Reserve’s preferred metric on the matter, while NFP represents a primary driver on the employment front. Inflation in particular has been a pain point for the U.S. economy this year, so any signs of life on that front could be a big positive for the U.S. Dollar. The downside with PCE is that it’s laggy, and the data that we’ll see next week will be for activity up to the end of June. But in the NFP report to be released on Friday morning, Average Hourly Earnings contained within the report will offer a more updated picture of inflationary pressure in the U.S. economy, and this may even garner more attention than the actual headline print provided that the data shows within a reasonable range of the +175k expectation. Also on the calendar are Fed speeches from John Williams and Loretta Mester on Wednesday. Given the pensive nature of the Fed’s stance around the balance sheet, comments from either of these voting members can elicit volatility across the USD-spectrum.

The forecast for USD will be set to neutral for next week. While the down-trend is extremely attractive, the stretched nature of the move denotes caution for continuation approaches. The litmus to attract new sellers into the market is likely quite high, and with diminished expectations on the U.S. data front, a ‘short squeeze’ may not be too far off in the distance.