- FOMC keeps rates unchanged as expected; Fed funds were pricing a 0% chance of a hike today.

- Fed’s July policy statement suggests that balance sheet unwind will start “relatively soon,” a change in language from “later this year” in the June statement.

- Concerns about inflation remaining “somewhat below” 2% in the near-term seem to be the focus for markets, which has been seen as a dovish blush; the US Dollar is down.

The Federal Open Market Committee shocked no one today when they announced they would hold the main overnight benchmark rate into a range of 1.00-1.25%, as was priced into the market well in advance of today’s policy meeting. Ahead of the decision, Fed funds futures were implying a 0% chance of a rate move today. After all, it was an ‘off-cycle’ meeting in which no new summary of economic projections (SEPs) were released nor was there a press conference by Fed Chair Janet Yellen.

Unfortunately for the beleaguered US Dollar, the FOMC’s July policy statement wasn’t hawkish enough to stem recent bleeding. While the Fed did say that risks to the economic outlook appear “roughly balanced,” they also noted that inflation is expected to stay “somewhat below” 2% in the near-term.

Accordingly, despite the fact that the FOMC also noted that the balance sheet unwind will start “relatively soon,” a change in language from “later this year” in the June statement, the policy statement contained too much concern over inflation to spark US Dollar strength. 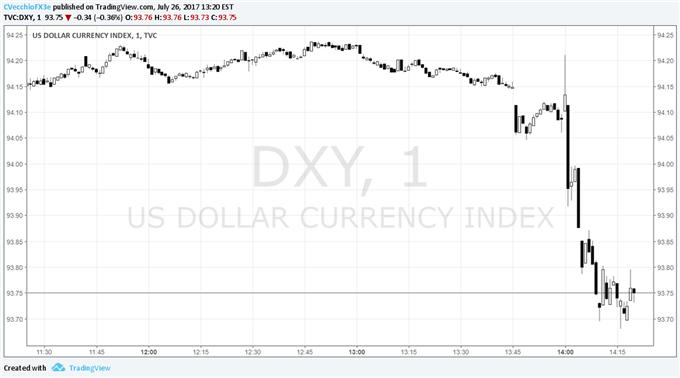 Following the rate decision, the US Dollar slipped back versus the Euro and the Japanese Yen, with the Dollar Index (DXY) falling from 94.08 ahead of the FOMC decision to as low as 93.68. DXY Index was trading at 93.75 at the time this report was written.