NZD/USD Looks Vulnerable. How Dovish Will the RBNZ Turn Next Week? 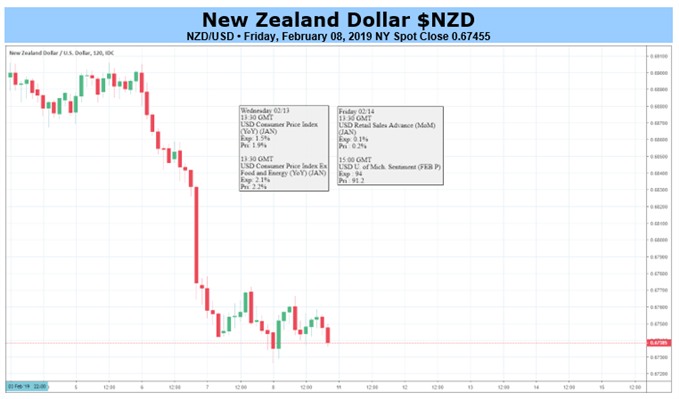 The pro-risk New Zealand Dollar turned lower last week along with a downturn in sentiment which saw the Dow Jones Industrial produce a bearish reversal pattern. Pessimism in markets occurred with worrying news regarding the US-China trade war front. US President Donald Trump noted that it is unlikely he will be meeting China’s President, Xi Jinping, before a deadline which – if passed - could trigger an increase in tariffs (March 1).

Arguably, the largest contributor to the decline in NZD/USD was a disappointing local jobs report however. The unemployment rate shot higher from 3.9% to 4.3% in Q4 2018 while the country added jobs at the slowest pace since Q1 2016. Looking at the chart below, RBNZ rate cut bets increased as the New Zealand Dollar weakened. 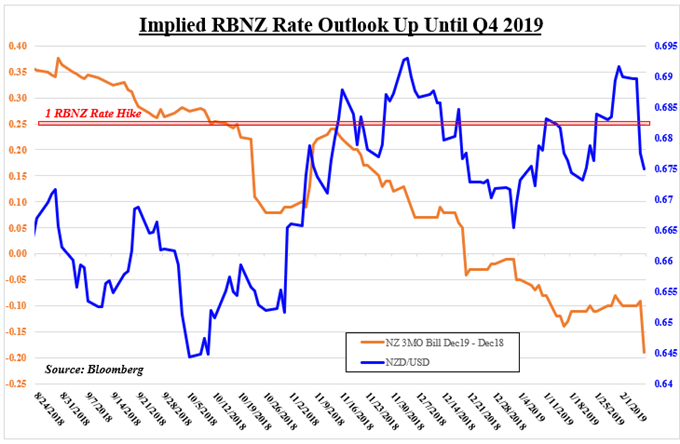 With that in mind, all eyes next week will be on the first Reserve Bank of New Zealand rate decision since November. A lot has happened since then. Most notably, the majority of developed central banks downgraded their views regarding economic projections. The most sudden shift to a more dovish stance came from the Fed as it went from expecting three hikes this year to perhaps none at all.

Closer to home, the Reserve Bank of Australia still held on to its neutral outlook on rates which initially boosted the Australian Dollar. However, Governor Philip Lowe then noted that they are no longer favoring a hike as their next move. This sent the Aussie Dollar collapsing and gives us a rather good idea of what could happen in the week ahead.

Unlike the RBA, the RBNZ has a more balanced view on monetary policy in the first place. Governor Adrian Orr noted back in November that they are not taking cuts off the table. He also noted that they envisioned rates rising perhaps in the third quarter of 2020 as it raised inflation expectations. With that in mind, the question here is how dovish will the RBNZ appear relative to expectations?

Overnight index swaps are pricing in about a 42% chance of a cut as soon as June 2019. If the central bank downgrades their economic projections but still surprises markets with leaving the door open to a hike, it could end up boosting the New Zealand Dollar. This is like what we saw with the Bank of England this past week. Keep in mind that Mr. Orr will then speak an hour after the interest rate decision. Cautious commentary that echoes the dovishness from other central banks could add weakness to Kiwi Dollar, making for a volatile day.