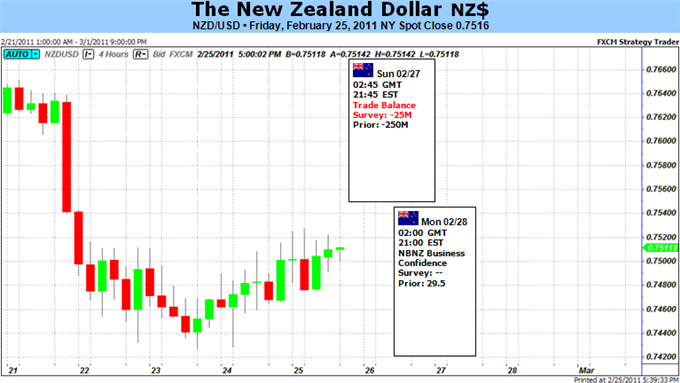 Both New Zealand and its currency were devastated this past week by a major earthquake in Christchurch – the second largest city in the country. In fact, this was the second tremor to hit the region in six months; but this particular quake was far more destructive than its predecessor. The loss of human life was bad enough; but the economic and investment implications for the kiwi further compound the situation. The assessment for damages made by the Prime Minister and reinsurers runs between NZ$6 billion and NZ$12 billion. That is enough to potentially detract 0.5 percent points of growth from the economy, further complicating a recovery that was already shaky given the imbalance of domestic factors and the strains of the global stabilization. That said, the real pain for the currency is tied up in the impact to interest rate expectations.

In reality, the New Zealand dollar’s place amongst the world’s most liquid currencies can be directly traced back to its historical role as an investment currency. In this function, an exceptionally high benchmark rate means that foreign investment in the country’s government debt means both safety of funds as well as a remarkable return. That said, the kiwi’s yield has trailed its Australian counterpart over the past year. A divergence between the two is not inherently a weight to the New Zealand currency; but expectations of rate hikes certainly would be. In the aftermath of the earthquake, we have seen expectations for one or two quarter-point rate hikes over a 12 month period turn into a forecast for 11 bps of cuts. Making things particularly rough for in the near-term, the market has fully priced in the possibility of a 25 bps cut at the next meeting and there is hearty debate that the move could be as large as 50 basis points. Maintaining rates is one thing; but seeing yield potential drop is another altogether.

As interest rate expectations have retreated over the past week, we have seen the kiwi react in kind. The drop was noted against safe haven and fellow-risky currencies alike. And, while this slide has clear fundamental roots; we should be reserved in our expectations of a trend. Though fear of a reduced yield income for an investment currency would seem damning; speculation has not often run counter positive returns over these past months. That means, the benchmark 3.00 percent yield on the currency will offer a strong reason for investors to keep capital in the market until there is confirmation that a cut is on the way. At the same time, the view of market-wide risk appetite will play a more prominent role here. Normally, a high yield would dampen the negative drift when sentiment soured; but the market’s bearings will be seen as a added weight to the central bank’s efforts going forward. All else held the same though, the panicked reaction to the earthquake and its implications for rates will likely be slowly retraced over the coming week as the market acclimates to the new fundamental reality.- JK