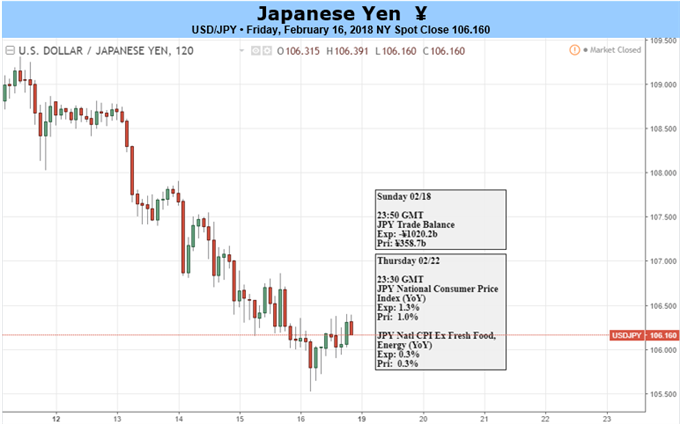 If you’re looking for longer-term analysis on the Japanese Yen, click here for our Trading Forecasts.

The Japanese Yen put in a pronounced move of strength this week as the currency crafted a fresh 15-month high against the US Dollar. Price action in USD/JPY drove-lower Monday thru Thursday, finally running into a bit of technical support on Friday morning. This bearish move broke through the support-side of a range that’s been in-place for more than nine months; and making matters more interesting is the fact that of these fireworks happened with a backdrop of seemingly ‘good’ news.

BoJ Governor Haruhiko Kuroda was re-appointed for a second five-year term atop the bank. While this was largely expected throughout the week, the formal announcement on Friday morning comes-in around the same time as that support bounce; but given dynamics across the FX market, it would appear as though the Friday pullback is more related to an oversold US Dollar seeing a bit of short-cover ahead of a long holiday weekend in the United States. 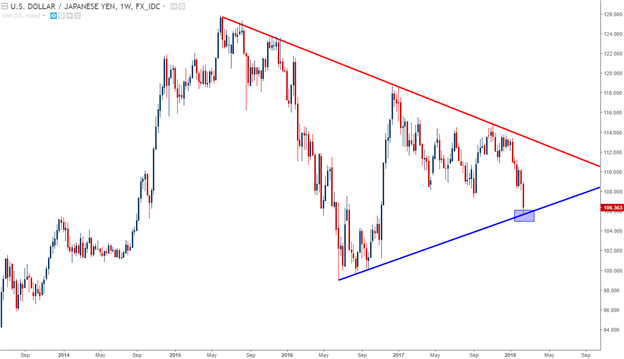 Governor Kuroda was the architect of the Bank of Japan’s massive stimulus program, coming into play with the election of PM Shinzo Abe in Q4, 2012. Since then, the Japanese economy has added a significant amount of liquidity as the search for 2% inflation continues. With Japan continuing to see inflation levels below one-percent, and even below .5% for the first half of last year - this kept the Yen as a favored currency for strategies of weakness, allowing for outsized bullish moves to develop in pairs like EUR/JPY and GBP/JPY.

More recently, that weakness has started to come into question as investors around the world speculate when the BoJ might actually begin to move away from those uber-dovish policy metrics. At this point, the BoJ has shown no signs of budging, but that hasn’t kept markets from staging a pattern of Yen-strength as inflation has started to creep-higher last month. Inflation came-in at an annualized one-percent in December. This is a 33-month high, and since we’ve had that print, matters of Yen-weakness haven’t really been the same. 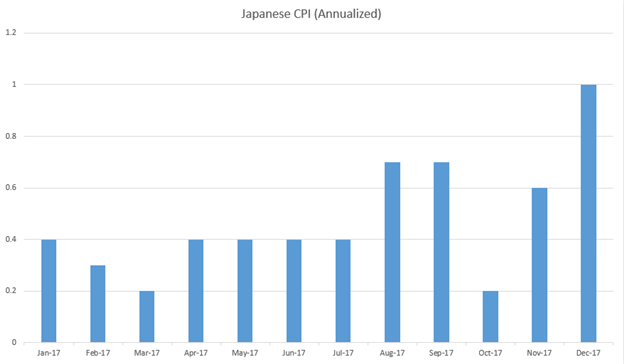 In response to this Yen strength, Japanese Finance Minister, Taro Aso, was directly asked whether or not the Finance Ministry might intervene to stem the flow. He deferred, saying that the gains in the currency weren’t yet enough to begin plotting intervention. In the wake of that announcement, the currency strengthened even more, and this keeps a rather bullish appeal to the Yen as we approach a vitally-important data print next Friday (Thursday at 6:30 PM ET in New York, 11:30 PM in London).

Next Friday will see the release of January inflation numbers out of Japan, and this will likely help to drive Yen-flows in the coming weeks. The next major driver after next week’s inflation print is the Bank of Japan rate decision on March 8-9, and that’s when we can hear how the bank might be looking to manage their QE strategy in the backdrop of rising inflation. But, if next week’s inflation comes out at an annualized one-percent or more, expect a continuation of strength in the Japanese Yen much as we’ve seen since the release of December inflation numbers.

The forecast for next week on the Japanese Yen will be set to bullish.

Are you looking for longer-term analysis on Yen? Our DailyFX Forecasts for Q1 have a section for each major currency, and we also offer a plethora of resources on our USD/JPY, EUR/JPY, GBP/JPY, and AUD/JPY pages. Traders can also stay up with near-term positioning via our IG Client Sentiment Indicator.