The anti-risk Japanese Yen and Swiss Franc were some of the best performing majors on Thursday. However, their strength did not coincide with a decline in the stock markets. In fact, Asia, Europe and Wall Street all ended the day higher. What gives?

For starters, the Yen enjoyed an early boost during Thursday’s session thanks to Japan’s Finance Minister who talked down currency intervention. Not long after his speech, the anti-risk currency retreated as stocks advanced.

Then, closer towards the end of the day, news crossed the wires that the Japanese government is considering nominating Masazumi Wakatabe for a senior Bank of Japan post. This person has been a strong quantitative easing advocate.

The markets quickly sold the Yen on the news. However, his appointment seems unlikely to change the direction of monetary policy under the recently reappointed Governor Haruhiko Kuroda. This is perhaps why traders soon reversed course and bought the Japanese Yen back, causing it to appreciate swiftly.

This move also coincided with a US Dollar selloff which helped cause it to become the worst performing major of the session. The greenback was already suffering from rising political risk at that point. In fact, by the end of the day, the US Dollar Index (DXY) closed at its lowest in more than 3 years.

Elsewhere, the British Pound experienced gains on some Brexit-related news. EU officials were considering watering down mechanisms that would sanction the U.K. is it breaks EU laws during the Brexit transition period. 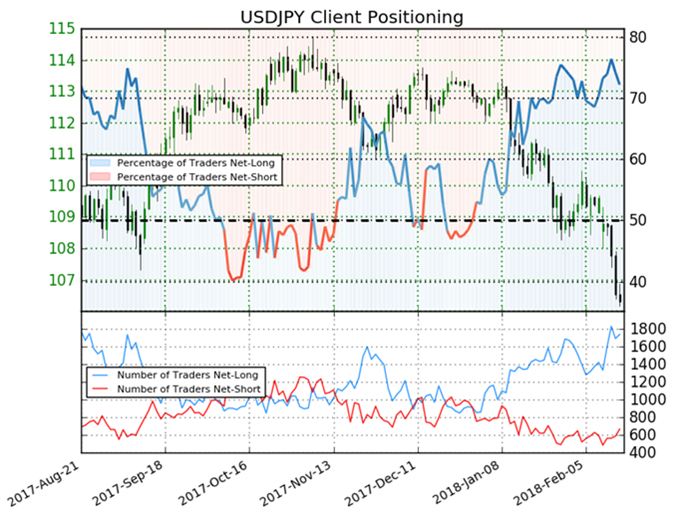 Retail trader data shows 72.2% of USD/JPY traders are net-long with the ratio of traders long to short at 2.6 to 1. In fact, traders have remained net-long since Dec 29 when USD/JPY traded near 113.244; price has moved 6.2% lower since then. The number of traders net-long is 7.2% higher than yesterday and 15.5% higher from last week, while the number of traders net-short is 8.9% lower than yesterday and 0.7% lower from last week.