GBP/JPY Bounces From Post-Brexit Trend-Line: Will it Hold?

- When good news brings on bearish behavior, change may be on the horizon, that’s seemingly been taking place in GBP/JPY over the past week.

- GBP/JPY has been in a hard bearish trend until running into a longer-term trend-line projection earlier this morning. But will this support be enough to completely turn the tide of the past two weeks’ pain?

The Japanese Yen has recently run-in to a rather pronounced bout of strength over the past couple of weeks. USD/JPY sold-off to a fresh yearly low earlier this morning, and this extends a pattern that’s seen the pair fall for five of the past six weeks. In yesterday’s webinar, we discussed the premise around Yen-strength, and this is seemingly taking place in a backdrop that should be conducive for Yen-weakness. BoJ Governor Haruhiko Kuroda appears to be headed for a second term atop the Bank of Japan, and given the fact that he’s the architect behind the massive stimulus program out of the country, it would reason that this would bring expectations for more of the same.

But price action has not indicated that, as Yen-strength has continued to show fairly visibly across the FX-spectrum even in the initial wake of that announcement. In the British Pound, we have our own host of bullish factors: The Bank of England posed a hawkish twist towards policy just last Thursday, and UK inflation yesterday came-in at 3%; further echoing the need for tighter monetary policy in the economy. But - those factors seem to have mattered little in GBP/JPY, where prices have peeled-lower every day since that BoE rate decision. On the hourly chart below, we’re looking at the slalom that’s developed in price action since last week’s Bank of England rate decision. 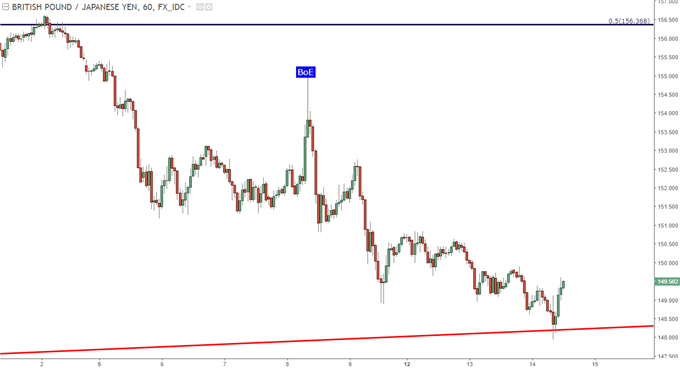 This morning’s sell-off seemed to hasten and, eventually, found support after the release of US Inflation numbers. Prices dropped down to fresh two month lows until support began to show off of a trend-line projection. This trend-line can be found by connecting the ‘flash crash’ low on October 6th, 2016 to the August 2017 swing low; and this comes after Fibonacci resistance showed-up earlier in February around 156.38. 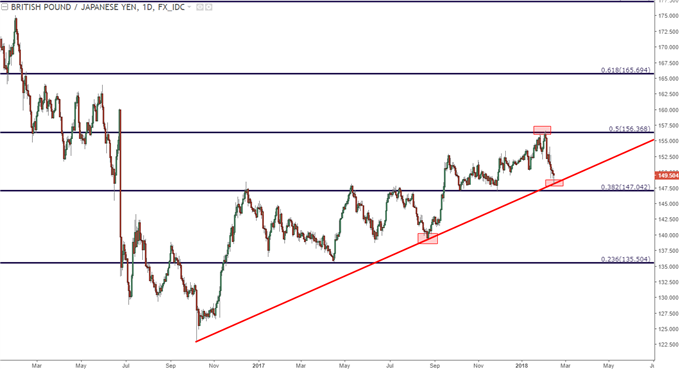 Be Careful – GBP/JPY Appears to be Waking Up

While the above support could be used for bullish continuation strategies, traders would likely want to exude caution if looking for topside exposure. The Yen-strength that’s shown over the past few weeks aligns with the rise in US yields, which may be indicating a deeper bout of risk aversion on the horizon. And however that pans out, the rate of change in GBP/JPY is undeniable, as we’ve just seen two months of gains erased in under two weeks, indicating that we’re seeing an expansion of volatility in a pair that has a penchant for such. Perhaps more disconcerting to bulls is how prices were unable to hold above the psychological level of 150.00.

This could be an opportune time to take a step back in order to allow near-term trends to align with longer-term price action. Prices digging out some element of support around the 147.04 level can keep interest around bullish strategies, plotting for a reversal of this recent bearish price action into the direction of the longer-term trend. That level is derived from the 38.2% retracement of the 2011-2015 major move, and the 50% retracement of that same study helped to set resistance earlier this month. 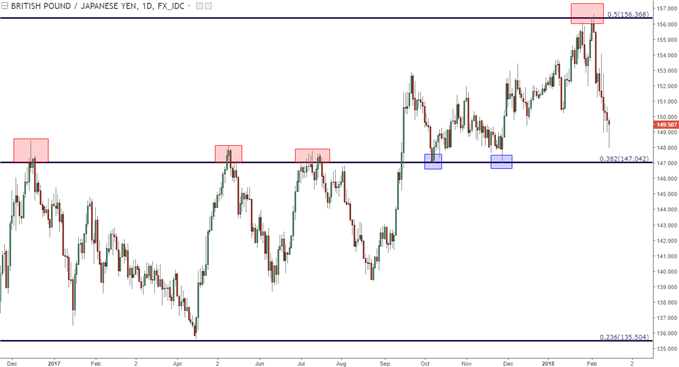 For bearish strategies, traders would likely need to use shorter-term charts with more concentrated risk amounts, so that if the bigger picture bullish trend does come back, losses can be contained.

Price action is making a quick jump after that trend-line inflection earlier this morning, and on the below hourly chart, we’re looking at three potential resistance levels that could allow for short-side continuation of this recent bearish theme. The key for working with any of these levels is to wait for resistance to actually show, as indicated by an extended wick on the four-hour chart, highlighting potential seller response to the level, in which stops can be placed on the other side of the eye of the wick. 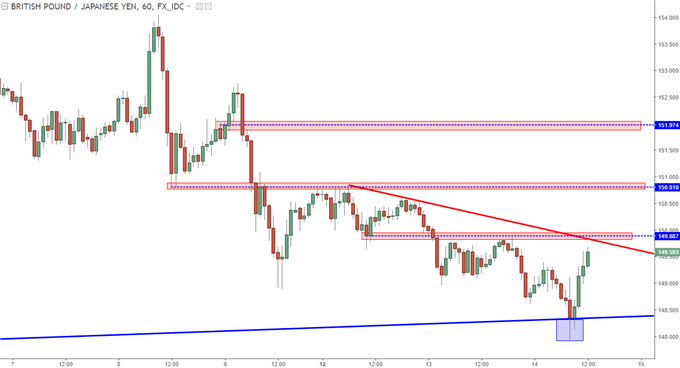