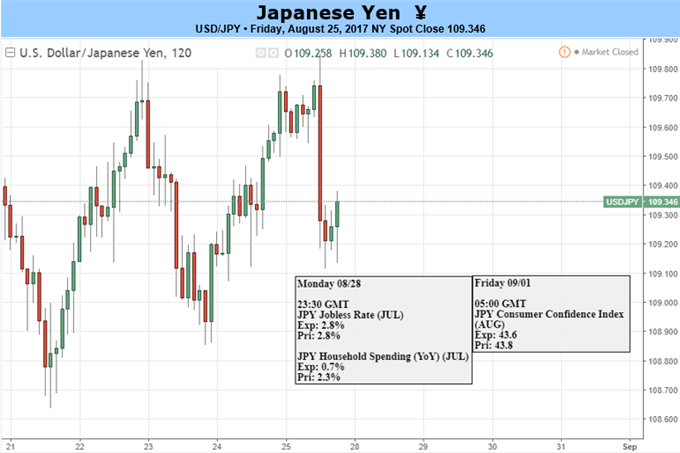 This week was somewhat of a wash for the Japanese Yen, as the currency moved sideways against the British Pound, Aussie and U.S. Dollar. The Yen did show a bit of deference to trends of strength in the Euro and CAD, as the one piece of significant Japanese data for this week indicated continued weakness in inflation. The bigger item of interest across global markets was the Jackson Hole Economic Symposium, where investors came in with piqued interest around the prospect of Quantitative Tightening. But in an excellent example of wordsmithery, Fed Chair Janet Yellen didn’t touch any topics having to do with monetary policy or outlook; as she instead focused on banking regulation and reform, specifically dialing-in on recent efforts to repeal policies that were put in to place after the Financial Collapse.

As we discussed last week, the inflation print released on Thursday was the highlight of Japan’s economic calendar. This was inflation for the month of July, and for the fourth consecutive month inflation came in at .4%, which is heavily below the 2% target from the Bank of Japan. This means that we’re probably nowhere near any rate hikes or policy tightening, such as what Central Bankers in Europe are currently staring down. This also means that there are very few reason for investors to look at the long side of the Yen under the expectation that anything on that front will change anytime soon.

But as we’ve been seeing for much of the year, the Yen has displayed some element of strength against many major currencies. This is likely related to the ‘unwind’ effect as risk aversion has begun to show with a bit more prominence in key areas, such as European stocks and, more recently, U.S. equities. With Japanese rates remaining in negative territory while inflation continues to languish heavily below the BoJ’s target, the Yen could still be fairly attractive for carry trade scenarios. This is especially applicable when matching up the Yen with currencies that are seeing higher rates get priced-in, like with what we’ve seen out of Europe so far this year and, more recently, Canada. But – when the prospect of principal losses outstrips that of the potential gain on the carry, traders will ‘unwind’ positions as they duck for cover, and this is probably why the Yen has been relatively strong against a wide swath of currencies from slow-growing economies.

Next week brings little by way of excitement on the Japanese economic calendar. We do get a series of medium-impact prints throughout the week: Jobless numbers on Monday, Retail Trade on Tuesday, Industrial Production on Wednesday, Housing Starts on Thursday and Consumer Confidence on Friday. Each of these could have some bearing on inflation, but given how stubborn prices have been in Japan throughout the year, the prospect of anything more than a quick move around any of these data points seems to be a bit of a stretch from where we’re currently at. More pressing for the Yen will likely be macro-related from high-impact data releases out of Europe and the United States, and how each of those may push or pull on risk aversion or tolerance. Europe has a series of CPI prints coming-out on Wednesday and Thursday, and out of the U.S., we get a basket of drivers that could bring some work-able moves into the Japanese Yen. For the U.S., we have Trade Balance on Monday, Consumer Confidence on Tuesday, the 2nd read of Q2 GDP on Wednesday, PCE on Thursday and a strong finish to the week with NFP and ISM Manufacturing on Friday.

For those looking at exposure in the Japanese Yen, as we’ve been saying, traders will likely want to pick their spots. If looking for Yen weakness under the presumption that risk aversion will fade away as U.S. and European Equities continue their years-long rally, the long side of EUR/JPY could be very attractive. For those that want to play a continuation of risk aversion, the short-side of GBP/JPY could be interesting for such pursuits. Against the U.S. Dollar, traders will likely want the range that’s built-in over the past four months to first give way before making any directional prognostications.

For the week ahead, the forecast for the Japanese Yen will remain at neutral.