What makes some traders stand out from the crowd? We’ve looked at more than 40 million real trades in an effort to isolate that winning DNA.

The Japanese Yen’s ascendency against the US Dollar this year is all-too obvious.

USD/JPY has in fact been in a broadly unchallenged downtrend since mid-December 2016 when the Dollar-supportive exuberance of the so-called “Trump trade” started to wane. Within that there has of course been movement, but the greenback is currently trapped in a further, shorter-term down channel which began in mid-July. You can see both trends clearly on this weekly chart. 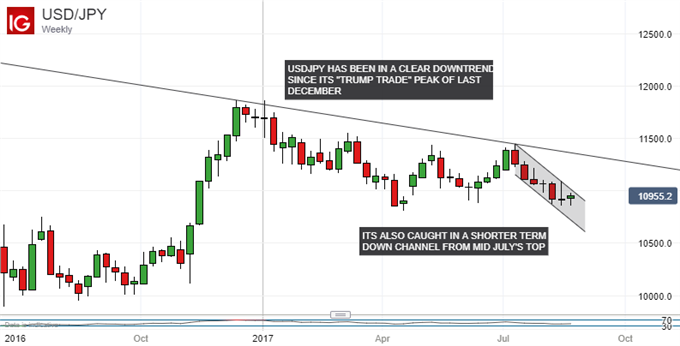 However, while there is yet no sign of any definitive shift in the two currencies’ relative fortunes, USD/JPY could be in for at least a short period of consolidation. The bears’ ambitions are currently constrained by a band of support which stretches from June 14’s intraday low of 108.80 down to April’s 17’s low of 108.12. That latter level is especially significant as it is also USD/JPY’s low point for the year so far. 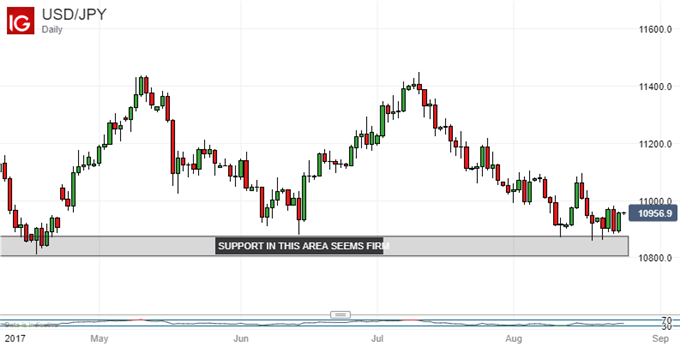 To stray for a moment into more fundamental matters, the current bout of defensive trade coincides neatly with the approach of the Jackson Hole central banking symposium. Given this its reasonable to assume that markets are looking for at least relative optimism from Federal Reserved Chair Janet Yellen, and perhaps some assurance that US monetary policy will tighten at least one more time.

If these are duly delivered, it’s also reasonable to assume that USD/JPY’s lows for the year will continue to hold, even if they don’t seem likely to become a springboard for a more solid recovery.

One currency which has been notably torpid of late is the Australian Dollar, and this is at least as evident against the Yen as anything else. The Aussie has slipped from its highs from the year, but it hasn’t fallen very far. It has also confined itself to a surprisingly narrow trading range, at least on a daily-close basis, for the last two weeks. 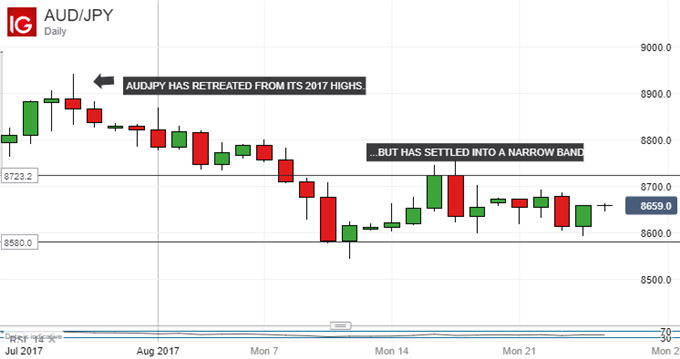 Relative comfort at altitude suggests that the Aussie remains a currency that traders would like to buy and hold. However, it looks as though a very gradual downtrend remain in place for the moment, and will do so unless the cross can regain the highs of early August.