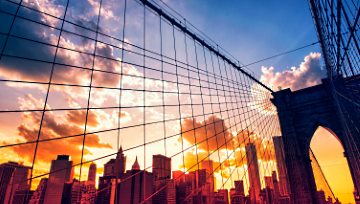 - U.S. Dollar strength has begun to show in DXY, but this move has been assymetric, as metals are shooting higher while the Yen also strengthens against USD.

- This would denote that we’re seeing more of a risk aversion/unwind move as opposed to a theme of fresh USD-strength. We look at how traders can use the Yen to play a continuation or a reversal of this recent theme of risk aversion.

Earlier this week we looked at the U.S. Dollar after DXY had spiked-higher after last week’s NFP report. As we shared, this was likely in-part to a ‘short squeeze’ scenario, as a heavily oversold Dollar moved-higher on a rather solid NFP report. But in the half-week since, the Dollar has remained supported above prior lows; and traders have been bidding the Greenback to slightly higher-highs, giving the appearance of bullish price action in DXY, as shown below:

To be sure – Dollar strength hasn’t shown across all global markets, as metals have also been rather strong during this topside move. Gold has put in a significant burst over the past few days, and this would point to the fact that what we’re seeing likely isn’t dollar bulls enveloping price action in DXY; but rather unwind of previous trends on the basis of risk aversion.

Also denoting the risk aversion nature of this recent move in the Greenback would be the fact that the Japanese Yen remains a bit stronger than the Greenback. If this were a legitimate move of USD strength as driven by the oncoming of USD-bulls, we’d likely see USD/JPY shooting-higher under the presumption that a dovish BoJ is unlikely to get hawkish anytime soon as inflation remains subdued in Japan. But the fact that this isn’t happening shows that we’re likely seeing unwind in USD/JPY, as well, as traders ‘tighten up’ to account for the greater degree of risk aversion.

Where the Dollar has begun to show strength has been against that previous high-flying trend in EUR/USD, and to a lesser degree, Cable. In EUR/USD, markets spent much of the period since mid-April pricing-in the prospect of higher rates out of Europe under the anticipation that the ECB would move away from their massive stimulus program at some point this fall. This led to a sharp topside move that saw little pullback, at least until now. On the hourly chart below, we’re looking at the bearish price action that’s shown in EUR/USD since last week’s NFP report.

The big question at this point is when buyers might step in to add exposure to trade the longer-term, bigger picture up-trend; which could nullify and take-out this shorter-term bearish move. The previous topside run in EUR/USD had driven the pair above two key, longer-term Fibonacci levels. At 1.1685 we have the 23.6% retracement of the post Financial Collapse-move in the pair, taking the 2008 high down to the January, 2017 low. And at 1.1736 we have the 38.2% retracement of the ECB QE move in EUR/USD, taking the May 2014 high down to that same January 2017 low. This produces a zone that, at least so far, has held the lows in the pair.

Given that what we’re seeing right now is likely more risk aversion-related as opposed to the start of a bullish up-trend in the Dollar, and traders can look to position their strategies around this potential driver. As we discussed yesterday, the Yen appeared to be a major push point with this theme of risk aversion, which appeared to have been triggered by U.S. President Donald Trump’s comments regarding North Korea’s continued nuclear ambitions.

As risk aversion has increased, the Yen has strengthened against most major currencies. And given that the Euro has been very strong on the prospect of a more-hawkish ECB, while the British Pound has been weak after last week’s dovish BoE outlay – and this can be paired-up with the Yen to investigate strategy.

We discussed this setup yesterday in the article, EUR/JPY Technical Analysis: Buyers Respond to Fibonacci Support. The key level here is at 128.52, as this is the 38.2% retracement of the ‘Abenomics’ move in EUR/JPY (taking the 2012 low up to the 2014 high).

For those that do want to trade a continuation of risk aversion, GBP/JPY could be a very attractive candidate. The British Pound has caught another gust of weakness after last week’s BoE rate decision, and until we see above-line inflation prints, there is little reason to garner bullish prospects here. If risk aversion does continue, and if the Yen does continue to strengthen on the back of that theme, a weakened British Pound could be an attractive counter-part.

We discussed the technical setup in GBP/JPY yesterday in the article, GBP/JPY Technical Analysis: Ascending Wedge, Confluent Support Test. Since then, we’ve seen prices slide below the ascending wedge formation, but remain supported at the 23.6% retracement of the October-December, 2016 move.

Current support at 142.46 has shown some interesting price action of recent. This level had helped to set resistance in the latter portion of July, just before the top-side breakout took out the highs. And on the way back-down, we’ve seen buyers stepping in to keep prices above this area.

But traders can use this as a potential signal to open up the bearish theme in GBP/JPY. If prices break-below this support level, bearish continuation will look considerably more attractive, as we’d have fresh near-term lows to couple with this recent batch of lower-highs.