Bank of England Recap: A hawkish Bank of England prompted a sharp rise in the Pound, particularly against funding currencies (EUR, CHF, JPY) as the central bank provided its strongest signal that they will not be going down the root of negative rates. The BoE left policy unchanged at its monetary policy meeting as expected, but perhaps what had also took the market by surprise had been the very optimistic growth outlook by the BoE who noted that growth expected to recover rapidly towards pre-COVID levels over 2021, reaching those levels by Q1 2022. Alongside this, BoE’s Ramsden had also talked up the possibility of tapering asset purchases with the central bank on course to complete its program by the year end. Full summary 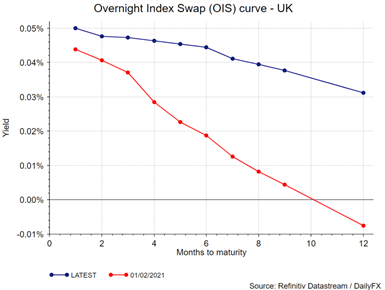 Subsequently, with the threat of negative rates eliminated, coupled with an encouraging vaccine rollout relative to its major counterparts (most notably the EU), the outlook remains positive for the Pound, with the preferred choice of having exposure against the Euro and CHF. This week saw EUR/GBP break to fresh multi-month lows at 0.8740-50, a level we pointed out a few weeks ago with the vaccine trade in full swing. That said, with an ECB that is jawboning the currency and a BoE that is downplaying negative rates, there will likely be more room for further losses. CFTC data adds to this, given that speculators hold a sizeable long position in EUR/GBP, thus the cross is vulnerable to a long liquidation.

The Bank of England: A Forex Trader’s Guide

EUR/GBP| Speculators Caught on the Wrong Side 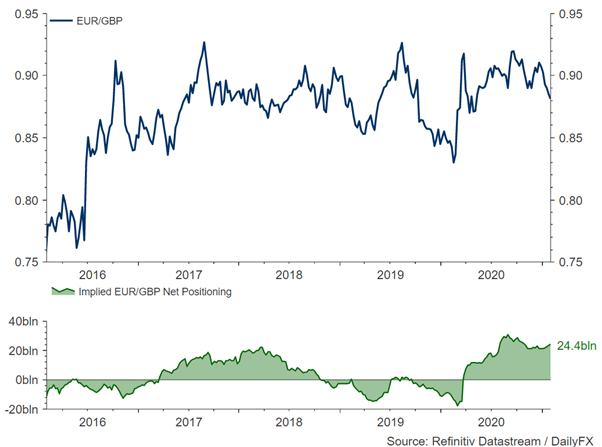 Closer Look at EUR/GBP: The chart below provides a clearer chart of the levels that I have on my radar. First, we are currently holding the 61.8% Fibonacci retracement for now, while this may offer some short-term reprieve, the outlook remains bearish below 0.8860. On the downside, should 0.8740 break, the next level is at 0.8860-70. 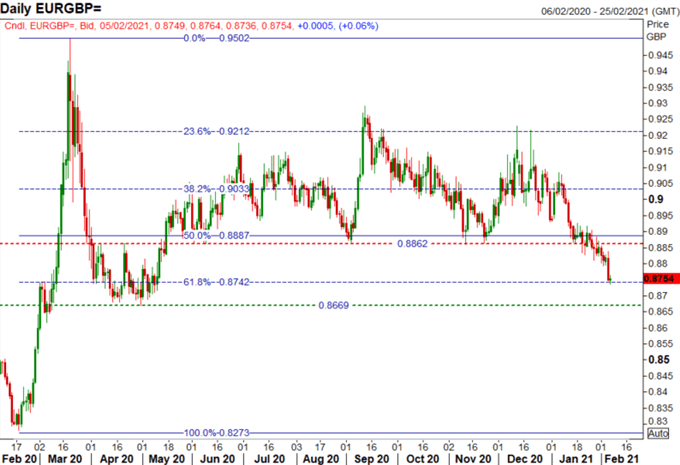 GBP/USD: The uptrend remains intact for the Pound, which had also managed to hold its own despite the trend reversal taking place in the USD. That said, following the BoE-inspired gains, we are now back to familiar resistance at 1.3750-60 of which a close above would be encouraging for bulls. But as I have mentioned above, GBP exposure vs funding currencies is the preferred choice. Taking a look to next week and there isn’t an awful lot of data to chew on, with only the Q4 GDP data from the UK (Feb 12th). However, given that the BoE noted in the MPR that they expect the data to be materially better than their November forecasts, I suspect the impact on the Pound will be minimal.

The Need to Know Guide on Trading the Pound (GBP) 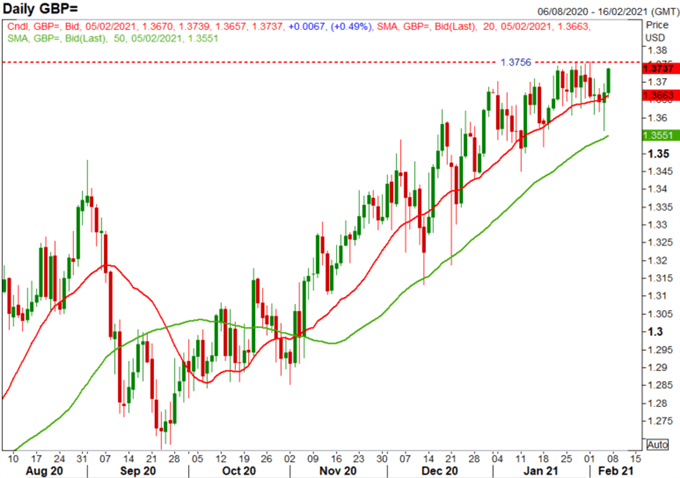