Trading GBP/USD: An Overview of the Pound-Dollar Forex Pair

In recent times, the institutional Forex market has become the largest financial market in the world. There are also a growing number of retail Forex traders. And when it comes to Forex, GBP/USD looms large. GBP/USD is the third most traded forex pair in the world and accounts for just under 10% of global foreign exchange turnover. In the most up-to-date report from the Bank for International Settlements (BIS), GBP/USD also known as “cable” accounts for 9.6% of the volume. 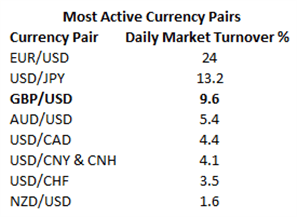 Recommended by Justin McQueen
Forex for Beginners
Get My Guide

This page on pound to dollar forex trading has five sections, each one designed to help the reader understand key concepts. Terminology highlights terms often used in Forex trading. The Importance of the US Dollar talks about the role of the American currency in FX. Best Time toTrade touches on some of the most active periods of liquidity and volatility. Market Structure covers key participants in Forex and GBP/USD including central banks and hedge funds. Tips for Fundamental, Technical and Advanced trading addresses macroeconomic events GBP/USD Forex traders watch, charting techniques and correlation analysis.

If you are a long, you want to own that asset on the expectation that it will rise in value, while if you are short, you sell something that you do not own, betting that the price will fall. In FX markets, you are simultaneously long and short a currency when taking a position. For example, if you are long or buying GBP/USD, you are expecting the Pound to rise in value against the US Dollar and vice versa.

Understanding the Importance of the US Dollar

When trading GBP/USD is it also important to understand the US Dollar, particularly when the dollar accounts for 88% of all trades in FX. In the early 2000s, an FX strategist from Morgan Stanley had invented the “dollar smile” theory, whereby the US Dollar tends to strengthen when the US is very strong or very weak, while relative growth outperformance in the rest of the world compared to the US leads to a weaker dollar. 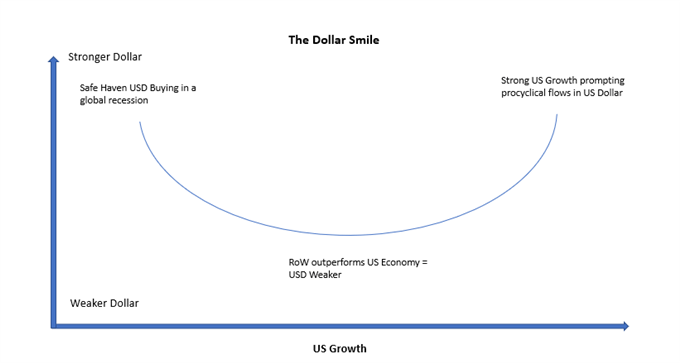 Currency traders must know the most active times of the trading day for liquidity and volatility purposes.Learn more about the importance of currency volatility. 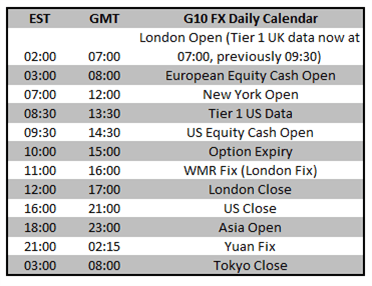 London Open (07:00 London Time): For GBP/USD, volumes will begin to pick up at the London open as market participants digest the events during the late US and Asian market session. Therefore, you will see a pick-up in momentum at this time, which also coincides with the European equity futures open. Alongside this, the ONS have recently have moved tier 1 UK data to this from 09:30 LDN previously.

New York Open (07:00 NY Time): While pound to dollar is a 24hour market, the most active and liquid time of the day is the LDN/NY crossover, which is generally the best time to trade the most liquid pairs. The crossover can occasionally be associated with a continuation of the moves observed in the European session. That said, it is important to watch closely for possible patterns in the LDN/NY crossover. 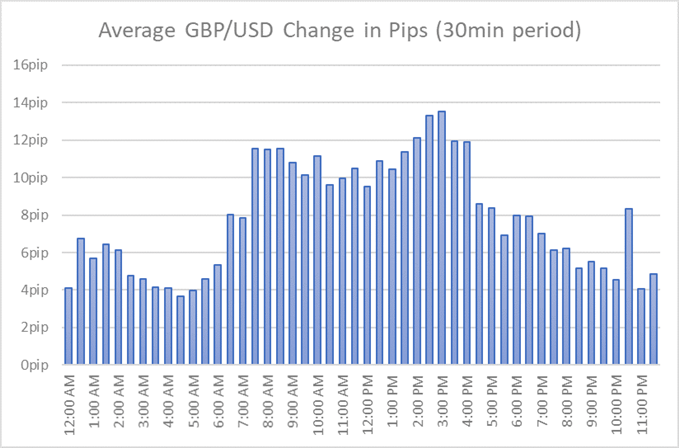 Tier 1 US Data (13:30 London Time): When trading Cable, you must be cognizant of the dollar side of the pair thus the tier 1 US data released at this time. Alongside this, other data points include Markit and ISM PMIs at 14:45 and 15:00 respectively.

Illiquid Time zones: Even in the most actively traded currencies, there are liquidity risks. Particularly during the early hours of the Asia trade as both volumes and liquidity drops off.

Early in the Asian trading session, the Pound had depreciated near over 6% in a matter of minutes before quickly retracing much of the losses. While there was a lack of clear catalysts to drive such price action among the major factors that had played a role in the move was the time of day, which is typically associated with lower market volume, making for illiquid trading conditions. Another factor that seemed to have had exacerbated the decline was the surge in demand to sell the Pound to hedge options positions, while a GBP negative media report had also added a marginal weight, however, this had not been new information. Consequently, these factors had contributed to a brief halt in futures trading. Learn more about flash crashes. 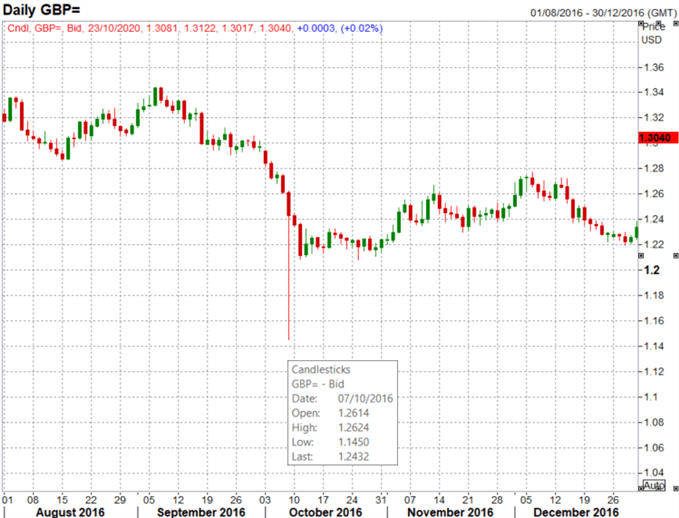 Banks: Where most FX trading occurs either through initiation or facilitation.

Hedge fund: This is a private pool of investor capital used to trade in various asset classes equities, commodities, currencies and derivatives to generate superior returns relative to risk. Hedge funds can be classified in several ways:

Recommended by Justin McQueen
Traits of Successful Traders
Get My Guide

Central Banks control monetary policy which has a significant impact on FX markets via altering the money supply and interest rates.

Retail Traders: These include days traders who are trading on retail trading platforms.

Risk sentiment: This can be a key driver for GBP/USD regardless of underlying domestic factors. The phrase you will typically see is “risk-on” if markets are up and “risk-off” if markets are trading lower.

Monetary Policy: Both globally and domestically, central bank policy is among the most important factors behind the direction of FX, given that it impacts interest rates. When trading GBP/USD, traders will have to analyse both the monetary policy actions and outlook from the Bank of England and Federal Reserve. As such, traders must read every speech from the monetary policy committee members, not only because this is what professional macro traders do but also even a slight change in guidance on monetary policy can be key the outlook for FX as markets are an efficient discounting mechanism.

For example, if the Federal Reserve hinted that they were looking to tighten monetary policy, while the Bank of England continued to maintain accommodative monetary policy. Interest rates differentials would begin to shift in favour of the US Dollar, attracting capital at the expense of GBP.

Geopolitics: In recent years, the influence of politics on FX has increased notably, thus it is key for traders to focus on it, particularly when politics can on occasions impact central banks via nomination of central bank governors. Alongside this, more specifically for the UK, Brexit has been a dominant theme since the UK voted to leave the EU in 2016.

Global Growth: The flow of capital is contingent on global growth.

Technical Analysis, which is also known as charting involves the use of past price behaviour to guide trading decisions. Technical analysis tends to comprise itself of similar human behaviours in that markets can move in predictable ways with patterns showing that history also repeats itself. However, technical analysis is not without criticism with the approach often seen as subjective in nature, such as confirmation bias.

That said, technical analysis is an important tool to utilise for risk management purposes. For example, a trader may be bullish on GBP/USD, however, the trader can be at a loss of where to get into a trade, set a stop loss or where they will get out. This is where technical analysis can be beneficial.

Support and Resistance: This is perhaps the most popular use of technical analysis with the assumption that the price will bounce off a level on more than one occasion.

Reasons for support and resistance 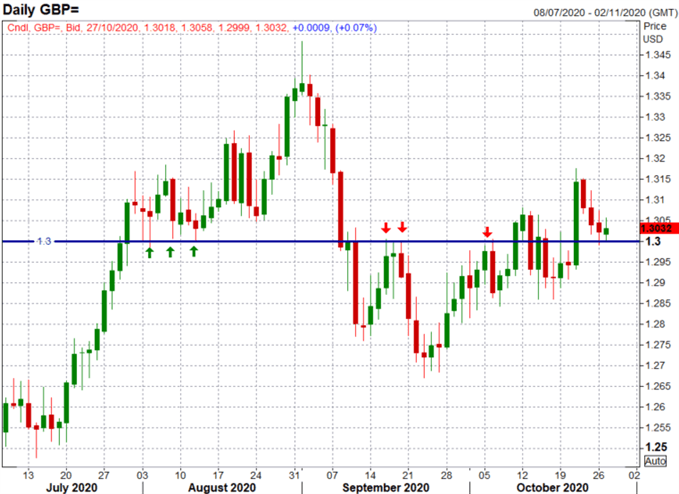 Moving Average: This is another widely used technical indicator, which represents the average closing price of the market over a specified time horizon. 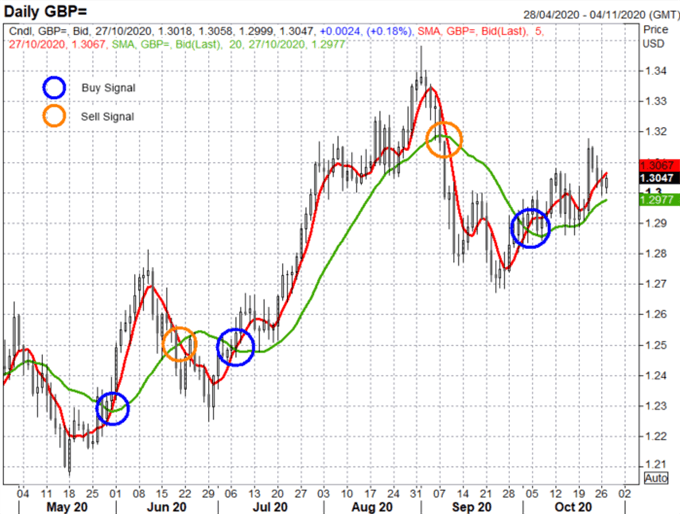 Other technical indicators include:

Learn technical analysis with DailyFX. In our education section you’ll find comprehensive resources for traders of all levels.

Correlation analysis: In a global market that is interconnected, FX markets can be driven by several variables, therefore, it is important to identify what is the dominant driver, which is why macro-based traders tend to lean on cross-market analysis. The beneficiary of this, is that it gives a trader a broader look at the market (as opposed to simply looking at their specific asset class), in turn this can help traders form an outlook.

There are however, two things to point out, a correlation does not equal causation and can sometimes be spurious. Correlations are also constantly evolving, which can depend on the market narrative at the time.

For those trading GBP/USD, traders are likely to follow these correlations: