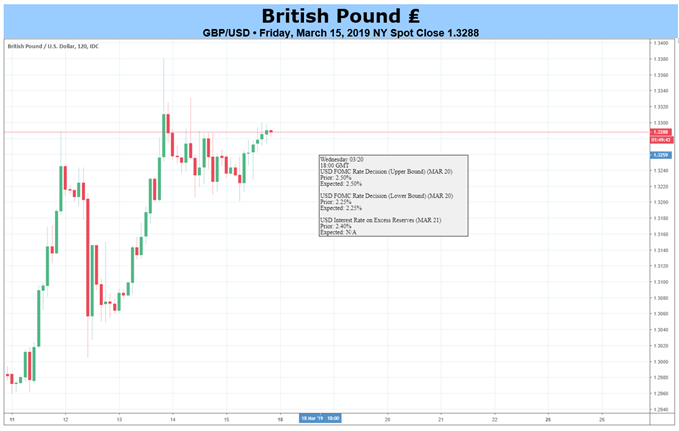 Sterling (GBP) Talking Points: Brexit and the Bank of England

As we write, the UK remains set to leave the EU in two weeks’ time after the government lost the second Meaningful Vote on Tuesday by another sizeable majority of 249 votes. The PM has promised a third and final vote on her Withdrawal Bill – expected on Tuesday March 19 – and is likely to lose that vote as well. If this is the case, the UK will apply to the EU for an extension of Article 50. It is this potential extension of Brexit that is currently propping up Sterling at its current levels as investors believe that a second referendum or a soft Brexit become more likely. The UK will still legally leave the EU by default on March 29 unless an extension is agreed. What is becoming more likely though is that the EU will only grant an extension if a clear and workable deal is presented to them, or if the UK promises a second referendum. PM May is also coming under increasing pressure from within her party to move aside, although looks unlikely in the short-term.

While Sterling remains resilient, next week will see increased volatility as the clock winds down leaving GBP at risk of a sharp sell-off if no agreement on an extension is agreed.

The Bank of England’s latest policy announcement on Thursday will see all monetary settings left unchanged as Brexit dominates forward planning. BoE governor Carney will again update on the bank’s readiness for anything that happens post-March 29. Before this meeting, the latest UK jobs and wages data will be released on Tuesday, one day before the inflation numbers are announced.

GBPUSD currently is benefitting from a small bid around the 1.3200, which if broken leaves 1.3177 as the next step down. Below here the 200-day moving average at 1.2940 guards the 23.6% Fib retracement at 1.2894. According to the RSI indicator, GBPUSD is neither overbought or oversold, while IG client sentiment highlights net-long and net-short positions are very evenly balanced. Overall however, the chart remains positive, suggesting higher prices ahead. 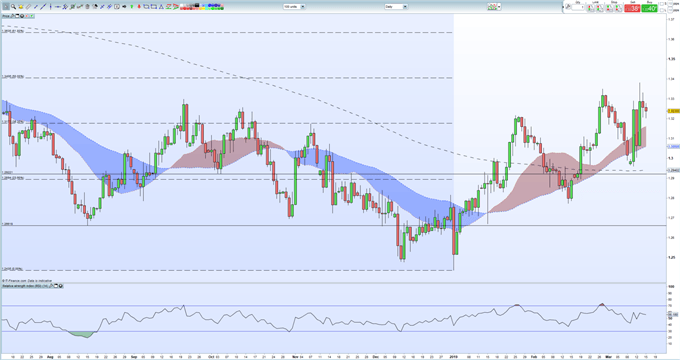 IG Client Sentiment data show 50.6% of traders are net-long GBPUSD. We typically take a contrarian view to crowd sentiment, and the fact traders are net-long suggest that GBPUSD prices may fall. However, if we factor in recent daily and weekly positional changes, we get apositive GBPUSD trading bias.