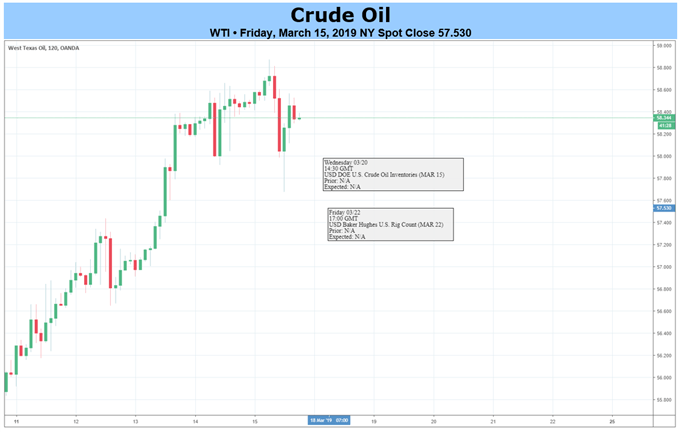 Crude oil prices reached new 2019-highs this past week, owing to a couple of fundamental developments. First, the US Dollar succumbed to selling pressure thanks to gains in the British Pound as Sterling rejoiced the UK Parliament ruling out a ‘no-deal’ Brexit. The commodity is often priced in the Greenback around the world, thus a cheaper dollar makes oil comparatively more expensive.

Meanwhile, official US Energy Information Administration (EIA) weekly inventory data reveled that there was an unexpectedly sharper drawdown in stockpiles, lifting crude oil as supply was constrained. Then, the monthly OPEC market report revealed that the oil-producing cartel encouraged producers to avoid flooding the market, while at the same time, trimming forecasts for demand.

Looking for a technical perspective on Crude Oil? Check out the Weekly Crude Oil Technical Forecast.

Demand concerns remain a wildcard that clouds the medium-term fundamental picture for oil prices as OPEC tries to curtail output. According to the EIA, the top two largest consumers of the commodity in 2016 were the United States and China. Both accounted for about 33% of total world demand. Slowing global growth, with China using fiscal stimulus to bolster their economy, is a bearish risk for the commodity.

According to the Citi surprise index, US economic data has been tending to increasingly underperform relative to economists’ expectations since February. At the same time, relatively speaking the world’s largest economy is enjoying stronger growth compared to some of its counterparts which are slowing such as aggregate Europe, and China.

Still, concerns about external risks have resulted in a considerably more cautious and dovish Fed that is data-dependent. The next rate decision is due this coming week, along with the BoE. The markets are slowly pricing in chances of a cut from the US. But, it is expected that the central bank will cut estimates for rate hikes this year. Even if they open the door to one cut, that is more hawkish than the consensus.

As such, risks are arguably skewed to the upside for the US Dollar as it would take a considerably more dovish central bank to surprise markets. Thus, the Fed may sink oil if USD gains in the event dovish bets are underwhelmed. But, don’t forget about the OPEC+ Joint Ministerial Monitoring Committee this weekend which may emphasize on supply cuts. As such, the fundamental outlook for oil is neutral.

For updates throughout the week on oil prices and technical analysis, you may follow me on Twitter here @ddubrovskyFX.