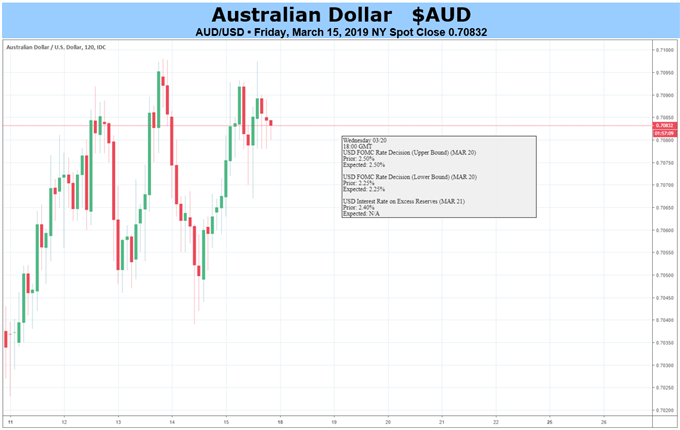 The Australian Dollar endured a somewhat calmer time last week than it has for much of this young year.

Admittedly-feeble official Gross Domestic Product numbers were probably the domestic focus. However, they were for the final quarter of 2018 and investors have had plenty of more current data to chew over since then, not that much of it has been particularly rosy.

In any event the currency didn’t suffer the sort of knocks it had to endure last month when the Reserve Bank of Australia admitted that record low interest rates could yet fall further, and when it made big cuts to its own growth and inflation forecasts.

The coming week will bring the minutes of the last RBA monetary policy meeting and speeches from two of its members. Deputy Governor Guy Debelle and Assistant Governor Michael Bullock will both be talking.

Given the relatively ‘dovish’ monetary policy tone of RBA speakers these days, it seems unlikely that any of these events will be especially upbeat for the Australian Dollar. Any reminders that the RBA welcomes a weaker currency or leans towards a neutral view of the likely interest rate path, could see the Aussie slip further.

Some key economic data are also due, though, of which official employment numbers will be the most important. The labor market is one of Australia’s few unarguable economic success stories, with strong job creation holding up remarkably well even as other indicators wilt. If this trend endures, Aussie bulls could well jump at it, but signs of weakness even here would probably be quite damaging to their cause.

Purchasing Managers Indexes for March will also be released. The previous month’s PMI showed the service sector in the doldrums while manufacturing continued to expand. Traders can probably expect a short-lived AUD/USD move on these data but little more given their modest bearing on inflation and, therefore, RBA policy.

All up this looks like a week when the overall lack of interest-rate support could weigh on the currency again, so it’s a bearish call. Assuming no outlandish economic weakness, however, there seems little reason to suppose that falls will be heavy, even so. Look out for trade-settlement headlines between the US and China too. Hints of progress here will very likely see AUD/USD catch a bid. 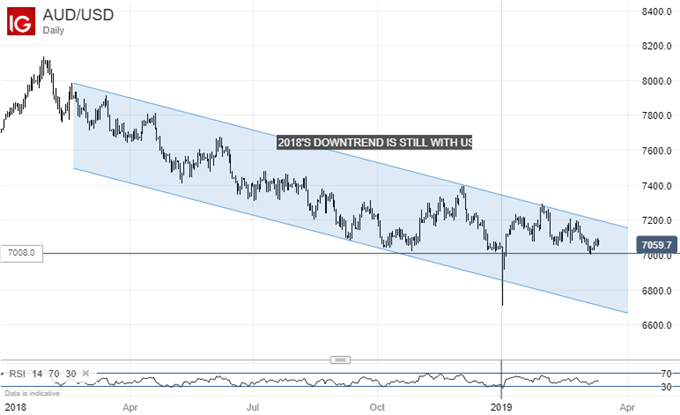