Join our analysts for live, interactive coverage of all major Australian economic indicators at the DailyFX Webinars.

The Australian Dollar leaped Thursday following the release of a blockbuster official labor-market report from its home country.

39,100 Australians found jobs in January, more than twice the 15,000 expected beforehand. The real jewel in the report was full time employment, which grew by a stunning 65,400. Part time roles declined by 26,300. The overall participation rate rose to 65.7%, from 65.6%, and the unemployment rate remained steady at 5%/

These numbers show that the hugely impressive cycle of Australian job creation has endured into 2019, so the Australian Dollar’s reaction was understandable. 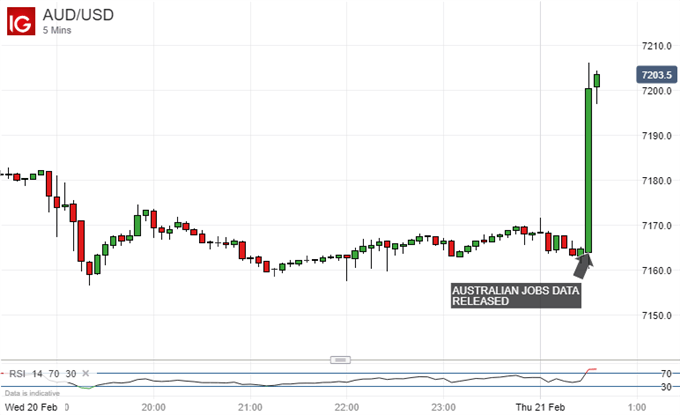 However, job creation has not so far led to much in the way of an inflationary push, with consumer price inflation still languishing below the Reserve Bank of Australia’s target range. There’s also little sign of wage inflation, with pay rises sluggish into the end of 2018.

On its broader daily chart the Australian Dollar remains pressured having headed lower earlier this month when the Reserve Bank of Australia admitted that record-low interest rates could yet fall. Previously it had insisted that the next move was likely to be a rise. The RBA also reduced substantially its forecast assumptions for growth and inflation. 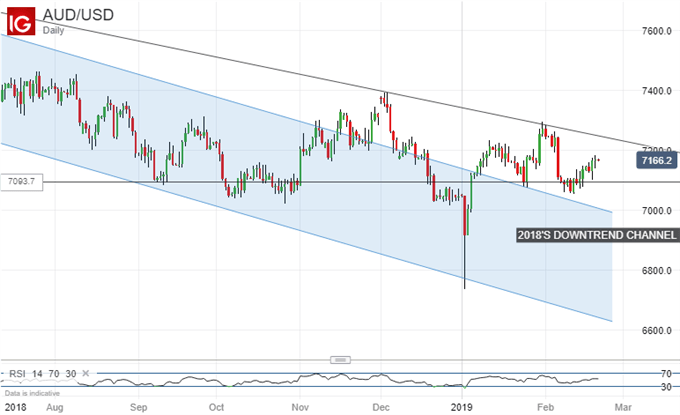 Still, AUD/USD remains above the downtrend channel which bounded trade for much of 2018, as US interest rates rose and Australia’s didn’t. The Australian currency has recently benefitted from the markets’ expectation of more monetary caution on the part of the Federal Reserve. Increased global risk appetite on hopes that China and the US can get through their trade impasse has also helped.