The Australian Dollar was hit hard Friday by market reaction to its own central bank – the second time this week the Reserve Bank of Australia has dealt it a knockout punch.

The RBA made drastic cuts to growth forecasts, perhaps most notably its call for Gross Domestic Product Growth by the end of this year’s first half. Where previously it had expected annualized growth of 3.25%, it now looks for only 2.5%. There were cuts to its calls across the quarterly-forecast board.

Inflation forecasts were also lowered, with annualized Consumer Price Index inflation seen at just 1.75% by year end, from 2.25% before. Significantly inflation is not expected to edge back into the central bank’s target band before the end of next year.

Now it’s been quite clear that the central bank had been too optimistic for some time, and to that extent it’s probably good that exuberance has been reined in, in a world where slowdown is evident in many economies, from China to Germany. Indeed, the RBA said on Friday that China indicators suggest, ‘a more pronounced slowing in momentum.’

The RBA sees the resilience of household consumption as the key domestic uncertainty, and stated again that the interest rate prognosis was now broadly balanced. It was this dramatic switch from a formerly unwavering belief that the next move was likely to be a rise, that hit the Aussie on Wednesday.

AUD/USD has now fallen by nearly two US cents this week, as market focus has shifted to worrying about US caution on raising interest rates to mulling the chances that the RBA might cut its own. 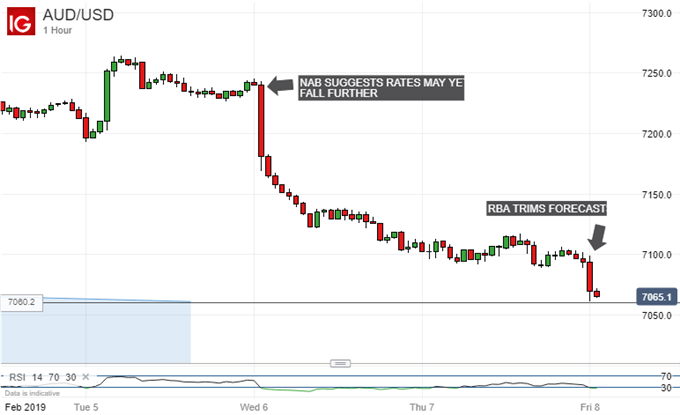 This possibility has been priced into Australia interest-rate futures markets for some time, underlining the extent of belief that the previous RBA forecasts were no longer appropriate.

However, this week’s news that the RBA now feels the same has clearly put the local currency under enormous pressure. There will probably be renewed suspicions that the central bank doesn’t mind this at all. Last year it was often relaxed about a lower AUD/USD rate, saying it gave a helpful boost to doggedly low inflation.

Markets will now be on watch for any similar commentary in the days and weeks ahead.