The Australian Dollar fell quite sharply on Wednesday on official acknowledgement that interest rates may yet fall below their current record lows.

Reserve Bank of Australia Governor Philip Lowe declared himself still optimistic about the outlook but he said that rates might have to go lower if unemployment were to rise while inflation stays low. This admission was actually in-line with futures’ market thinking before Lowe spoke, but it was a change from much previous RBA commentary which had it that the next move was most likely to be a rise.

AUD/USD lost nearly a cent in the aftermath of Lowe’s remarks which were delivered in a Sydney speech. On its daily chart the Aussie slipped back below its most recent downtrend, putting bearish focus once again on the downtrend channel which marked trade for much of 2018. 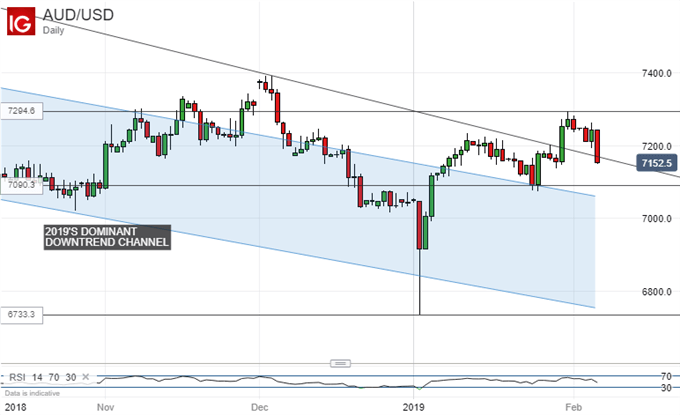 Near-term support now comes in around January’s 25’s lows of 0.7090. They guarded the top of the downtrend channel back then and held. Whether or not that level can hold again if tested may be instructive.

The US Dollar edged up against most of its widely traded rivals, with the haven Japanese Yen lower as risk appetite held up.

The effect of Donald Trump’s State of the Union speech was hard to gauge given the number of local markets which were closed for the Chinese Lunar New Year break. Trump praised the US economy’s strength, naturally enough, saying that the only thing which could put a break on this were ‘foolish wars, politics or ridiculous partisan investigations.’

The US President also said that he would meet North Korean leader King Jong Un for a second time at the end of this month, with a meeting apparently scheduled in Vietnam.

In any event stocks remain wanted thanks to the prognosis of more restrained global rate rises, exemplified most obviously by last week’s Federal Reserve monetary policy statement. US earnings have been pretty good too.

Gold and crude oil prices were both pretty steady through the Asian session, which was hardly surprising given that so many markets were out. More broadly the former remains supported by the weaker interest-rate prognosis, while the latter remains hostage to worries about global growth and, therefore, demand.

There’s not a lot left for investors on Wednesday’s data schedule. German factory orders are coming up, just ahead of that country’s construction Purchasing Managers Index. US trade balance and mortgage application numbers await too, as do Canada’s building permit figures.