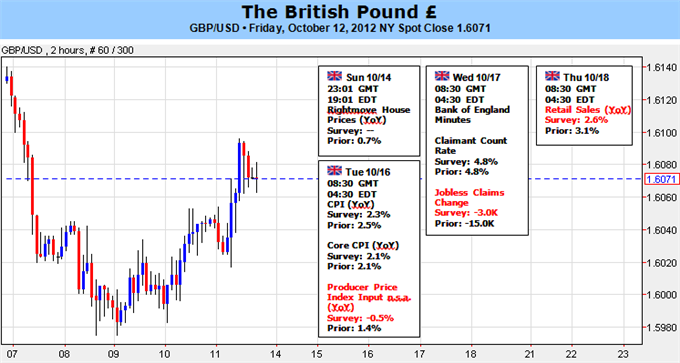 The British Pound posted its third-consecutive weekly decline against the US Dollar (ticker: USDOLLAR) on another stretch of lackluster UK economic data and a broader USD bounce. Yet the coming week’s inflation data and Bank of England Meeting Minutes could provide catalyst for a bounce.

A busy week of economic data points to potentially significant swings in the British Pound, but FX Options traders are nonetheless positioned for miniscule volatility as the GBPUSD sticks to a choppy trading range. Highlights will include Producer, Consumer, and Retail Price Index inflation numbers, Bank of England meeting minutes, Jobless Claims Change data, and Retail Sales growth figures all due between Tuesday and Thursday.

We’ll keep a close eye on Bank of England Minutes from its most recent rate decision, as the recent rhetoric from the UK central bank suggests that officials are increasingly concerned about price inflation and may be near the end of accommodative monetary policy. Current BOE forecasts point to inflation rates dropping well-below official targets through 2013 and arguably leave scope for further easing.

Similarly aggressive easing from the US Federal Reserve and European Central Bank, there has been little reason to drive the GBP significantly beyond recent ranges. Yet that could change on the first sign that the BOE will be the first to stop inflationary asset purchases, and the British Pound could react to any hawkish shifts in Bank of England minutes. To that end, large swings in preceding CPI, PPI, and RPI data could have similar effects on the British currency.

Given exceedingly low volatility expectations, it may take important surprises out of economic figures to force the British Pound out of its narrow trading range. Yet traders are clearly waiting for some sort of catalyst to drive the British Pound, and we would argue that the coming week’s developments have as strong a chance as any to provide that spark.

From a technical perspective, the British Pound may need to clear key resistance of $1.6135 or significant support of $1.6000 to shift our neutral trading bias. Low volatility favors selling GBPUSD at resistance and buying at support within its narrow trading range. Volatility can only remain so low for so long, however, and we suspect that the next major breakout could determine the GBP trend through the foreseeable future. - DR