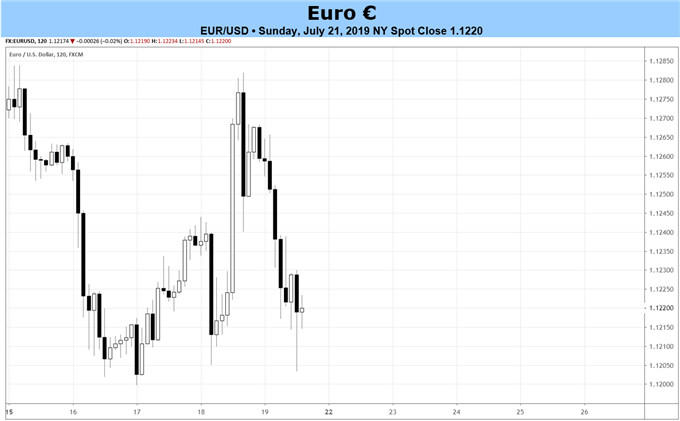 The Euro finished broadly lower as the calendar turned through mid-July, slipping lower in the second half of the week as the July ECB meeting has come into focus. EUR/NZD was the worst performing cross, down by -1.50%, doubling losses by its antipodean cousin, EUR/AUD, which shed -0.75%. Weakness in both crude oil prices and Brent oil prices curtailed the energy sector-sensitive EUR/CAD, which only fell by -0.20% over the week.

Elsewhere, with global equity markets pulling back amid speculation that the Federal Reserve won’t be too heavy handed with its dovish policy action in the near-term, the trio of safe haven currencies posted gains versus the Euro as well: EUR/CHF fell by -0.67%; EUR/JPY fell by -0.62%; and EUR/USD dropped by -0.44%.

The upcoming economic calendar for the last full week of July is unevenly distributed for the Euro; taking on a ‘humped’ shape, the Euro economic calendar is light at the start and end of the week with significant events occurring in the middle. The preliminary JulyFrench, German, and Eurozone PMI surveys due on Wednesdaycould have significant bearing on the July ECB meeting just one day later.

After all, with markets essentially discounting a coin flip’s chance of a rate cut, every piece of data leading up to the July ECB meeting will be closely scrutinized. The forecast of 52.1 for the headline Eurozone Composite PMI would only constitute a slight moderation from the 52.2 reading seen in June, suggesting a soft growth environment persists.

An objective look at European economic data shows that conditions have improved, relatively speaking, over the past few weeks. In recent days we’ve seen the May Eurozone Trade Balance post a larger than expected surplus and the final June Eurozone Consumer Price Index come in slightly higher than expected. Accordingly, the Citi Economic Surprise Index for the Eurozone, a gauge of economic data momentum, has improved to -8.8 by the end of last week; three months ago, it was at -43.3. 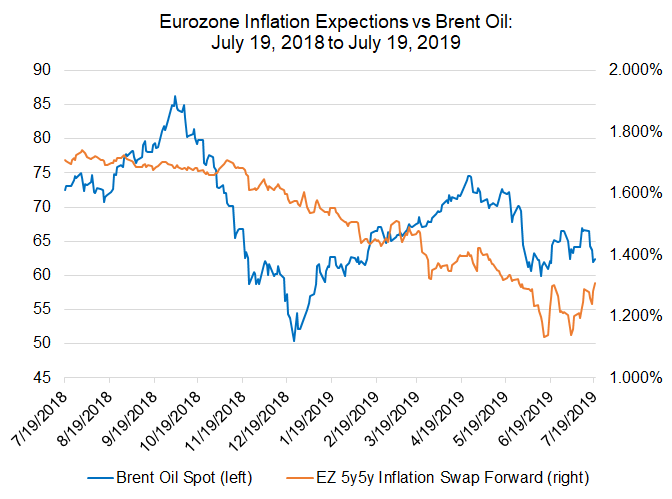 Despite the recent drop in energy prices, the weaker Euro has seemingly been enough to offset the decline by crude and Brent oil prices; a direct indication that markets are pricing in dovish policy action by the ECB (reflexively, if the ECB eases, then interest rate expectations should have bottomed. Outgoing ECB President Mario Draghi’s preferred measure of inflation, the 5y5y inflation swap forwards, closed last week at 1.310%, barely higher from where they were one month earlier at 1.304%, but still significantly above the yearly low set on June 17 at 1.141%.

The aforementioned factors – the sluggish growth conditions, the rebound in inflation expectations back to unimpressive levels – has markets toying with the notion that the ECB’s Governing Council could cut interest rates at the July ECB meeting. Speculation has increased in recent weeks following ECB President Draghi’s speech at the ECB Forum in Sintra, Portugal in late-June, which immediately spilled over into a weaker Euro.

But this is not a situation like we’ve experienced in recent months where rates markets have been overwhelmingly in favor of rate cuts well in advance of moves by the Reserve Bank of Australia and the Reserve Bank of New Zealand (and soon, the Federal Reserve).

According to separate Bloomberg News and Reuters surveys of economists, the ECB will not move on any of its key interest rates this week – the main rate, the marginal lending facility, or the deposit facility rate. Yet a look at market pricing as derived from Eurozone overnight index swaps suggests otherwise: 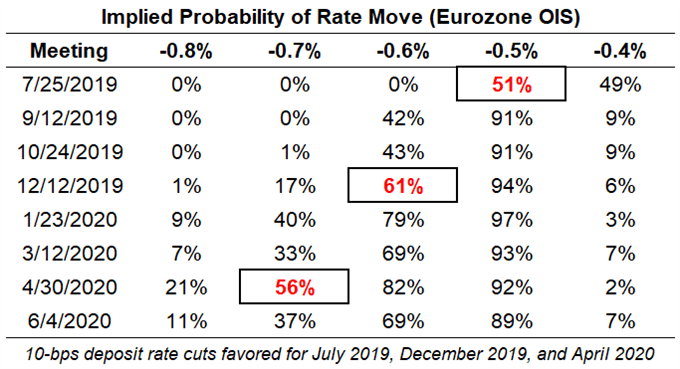 According to overnight index swaps, there is a 51% chance that the ECB will cut rates by 10-bps this week. This is not exactly convincing, overwhelming evidence; indeed, this strategist prefers to wait until markets price in at least a 55% chance before we can begin to make an interest rate forecast call with any conviction.

But with markets essentially predicting a coin flip’s chance of a rate cut – if we’re using implied probabilities as a proxy for the portion of the market correctly positioned for the July ECB meeting – then approximately half of all market participants will have to readjust their positioning come Thursday. The Euro appears destined for significant volatility in the second half of the week.

Beyond the July ECB meeting, there are several items on the calendar that will drive volatility in EUR-crosses and beyond. Any movement in the US-China trade war talks has implications on Fed rate cut pricing, which in turn means EUR/USD will remain sensitive to any news coming from US President Donald Trump’s twitter feed. Similarly, EUR/USD’s sensitivity to data will stay high through Friday with the release of the initial Q2’19 US GDP reading.

Elsewhere, with the Tory party leadership election contest wrapping up this week, the latest Brexit developments and initial steps taken by the new UK prime minister should keep EUR/GBP traders on edge. 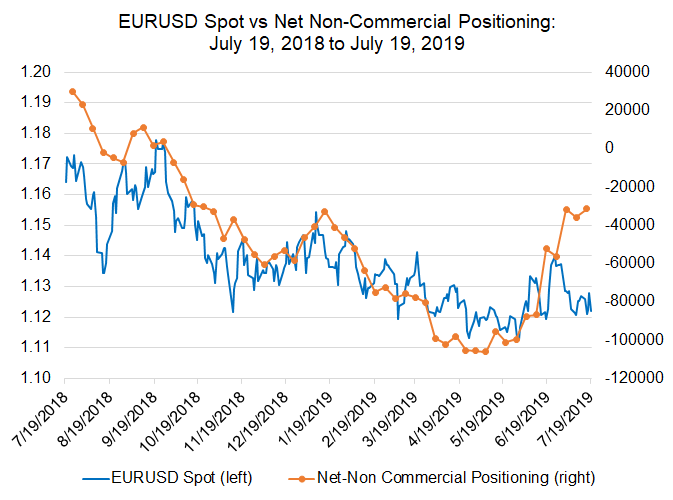 Finally, looking at positioning, according to the CFTC’s COT report for the week ended July 16, speculators dramatically decreased their net-short Euro positions from 35.9K to 31.4K contracts. The futures market is now the least net-short is has been since September 2018.

Unfortunately, given that the July ECB meeting will take place after the Tuesday reporting period, the next CFTC COT report will not capture any significant shifts around this week’s most significant event.