Just two weeks after the June European Central Bank meeting, ECB President Mario Draghi has spent part of his time at the ECB Forum on Central Banking in Sintra, Portugal talking up the possibility of more stimulus in the coming months.

The latest signal for a dovish turn by the ECB comes as other central banks, such as the Reserve Bank of Australia and the Reserve Bank of New Zealand, have already cut their main interest rates. Meanwhile, the Federal Reserve appears on the verge of starting its interest rate cut cycle in earnest when it announces the results of the June Fed meeting on Wednesday, June 19.

The comments by ECB President Draghi today mark a departure of the patient, ‘wait-and-see’ approach prescribed at the start of the month. It was at the June ECB meeting that ECB President Draghi declared that he doesn’t “see any substantial worsening in outlook.” But now, “in the absence of improvement,” ECB President Draghi appears ready to act with “further cuts” to interest rates to support the near-term economic outlook.

While the comments from ECB President Draghi may have sparked the ire of US President Donald Trump in a series of tweets this morning, the central bank chief did say that “we have our remit, we have our mandate…defined as [targeting] a rate of inflation close but below 2 per cent over the medium term…we are ready to use all the instruments that are necessary to fulfil this mandate and we can’t target the exchange rate.”

Even if the Euro isn’t being directly targeted by ECB monetary policy, the indirect impact of the ECB’s latest dovish turn is that traders are driving EUR-crosses lower. 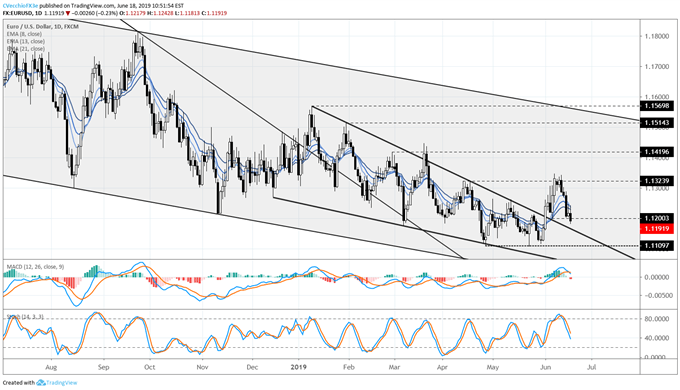 After appearing to start the process of bottoming out at the start of June, a clear lack of follow through to the topside in recent days has seen EURUSD prices lose significant technical support. The bullish piercing candle on June 6 constituted a near-term swing level of support, and a close back below said level at 1.1200 today would be a strong indication that further losses are due in the days ahead.

Momentum is quickly eroding for EURUSD, with price back below the daily 8-, 13-, and 21-EMA envelope, while both daily MACD and Slow Stochastics have started to turn lower (albeit only the latter is in bearish territory at this time). It’s possible that the coming days see EURUSD rates return to the bullish falling wedge pattern; if so, the odds of a reversal back to the yearly lows near 1.1110 would increase. 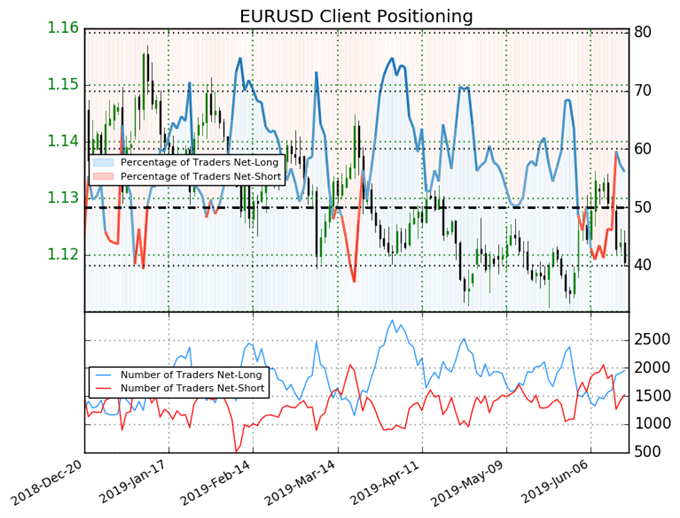 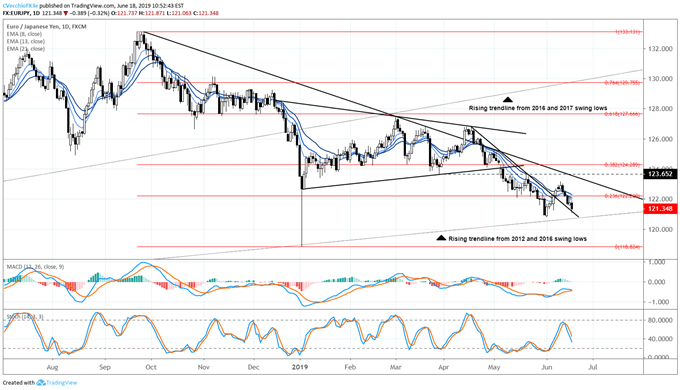 EURJPY rates are at a key decision area following ECB President Draghi’s comments on Tuesday. It was just last week that EURJPY prices closed above the daily 13- and 21-EMAs for the first time since April 23, breaking the descending trendline off the April and May swing highs in the process.

But the break of the descending trendline is now in question, with EURJPY rates having come back down to test the former resistance as support. The retest is taking place around 121.22, the bullish piercing candle low from June 6 (note: a key date for EURUSD as well: the day of the June ECB meeting). Beyond there, a return below the descending trendline off the April and May swing highs would be a strong indication that the yearly closing low of 120.92 would be in focus. 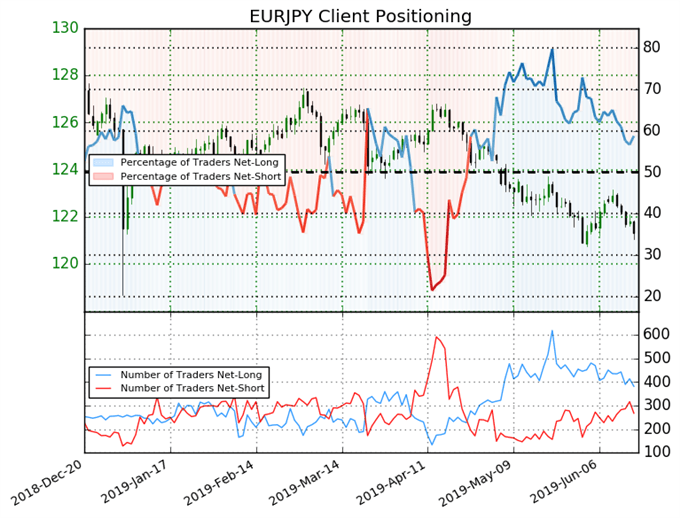