Euro Forecast: In Wake of ECB Downgrades, Attention Back to Politics 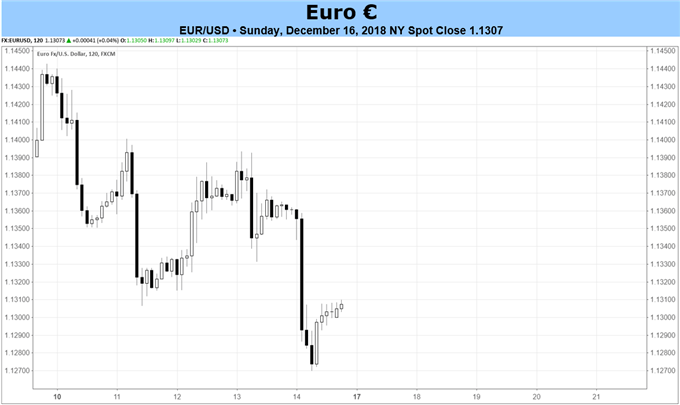 - The ECB used its December policy meeting to reduce its GDP and inflation forecasts and note that downside risks were increasing.

- Amid an otherwise quieter economic calendar this week, the ECB’s commentary will resonate as political risks in the Eurozone continue to increase.

The Euro was one of the worst performing currencies last week, losing ground against all but two currencies, EUR/NZD (+0.37%) and EUR/GBP (+0.49%). Losses picked up after Thursday, when the European Central Bank paved the way for broad Euro weakness. EUR/USD led the way lower, dropping by -0.65% and below 1.1300 at one point for the first time in three weeks.

Inflation Poised to Head Lower Thanks to Oil

It seems more likely than not that forthcoming inflation readings are depressed, given the fact that energy prices continue to fall: Brent Oil is down by -9.7% over the past four-weeks. During this time, Draghi’s preferred market-measure of inflation, the 5-year, 5-year inflation swap forwards have decreased by -6.6-bps to 1.618%.

Rather, the key defining aspect of the ECB’s policy meeting were the words used by Draghi in describing the central bank’s changing perspective on the growth outlook. He noted that “the balance of risks [to the growth outlook] is moving to the downside owing to the persistence of uncertainties related to geopolitical factors, the threat of protectionism, vulnerabilities in emerging markets and financial market volatility.”

These words will ring loudly over the coming week, largely to fill the void left by a quieter economic calendar (no ‘high’ rated events). In particular, Draghi’s words will refocus attention now the Italian government has dug its heels in over the European Commission’s desire to dictate its budget.

Furthermore, it can’t be dismissed that French President Emmanuel Macron is seeing his viability erode rapidly amid the “gilet jaunes” or “yellow vests movement” protests. For more detail, it’s worth reading “Euro Forecast Weakens as Paris Riots Threaten Macron Presidency.” Draghi is clearly concerned about the rising political risks in the Eurozone, especially at a time with significant exogenous factors (like Brexit and the US-China trade war) in the background.

Lastly, as always, in terms of positioning, the CFTC’s COT report for the week ended December showed that speculators had decreased their net-short Euro positions to 56.2K contracts, a drop from the 60.8K net-short contracts held in the week prior. Positioning has become interesting once more, but nevertheless persists on the historically light side and thus the risk of capitulation (short covering that would send the Euro sharply higher) remains low.