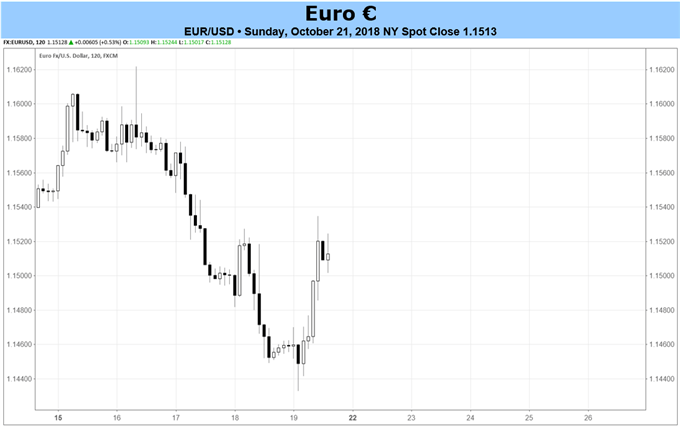 - Volatility has remained high across asset classes, but the Euro hasn't been a focal point of attention so its moves were limited last week.

- The forthcoming ECB meeting should be a dull one as policy remains on a preset course (end QE in December, hike rates “summer 2019”), no rate move is expected, and no new set of Staff Economic Projections due.

- The IG Client Sentiment Index remains ‘bullish’ for the Euro as retail traders continue to buy the US Dollar on dips.

The Euro finished in the middle of the pack again last week, trading within +/- 0.5% against six of the other seven major currencies. The lone standout was EUR/NZD, which dropped by -1.74% as the aggregate impact of stronger New Zealand inflation figures and failure by the US Treasury to name China an FX manipulator gave ground for recovery in the antipodean currency (the second worst EUR-cross on the week was EUR/AUD, down by -0.47%). Two of the more popular pairs, EUR/GBP and EUR/USD, made little net-progress, with the former adding +0.19% and the latter dropping by -0.40%.

As has been the case for most of October, the Euro remains a passenger on the recent rollercoaster of volatility. Like the week preceding it, the economic calendar yielded little insightful information, and while there were several news items related to the Italian budget, nothing concrete emerged; we’re essentially in the same place in the Italian budget saga as we were at the end of September. While investors continue to push up Italian BTP yields, the Euro has weathered most of the erosion in credit conditions, suggesting that a resolution to the budget saga would be a potent bullish catalyst.

While we expect Italy to remain a focal point in the days ahead, the coming week will be different than the week that preceded it, insofar as the economic calendar has meaningful information that typically moves FX markets as well as the October European Central Bank rate decision. With respect to the policy meeting, traders may want to temper expectations for significant price action developing. After all, there is no new set of Staff Economic Projections (those were received last month), which already biases the ECB towards inaction.

But the key factor is that ECB policy has been on a preset course since June 2018, and nothing has changed in recent weeks to warrant a reconsideration of the path forward: the QE program will end in December 2018; and the first rate move will come sometime in the “summer 2019,” likely September. Recent inflation data has been near the ECB’s +2% medium-term target, and medium-term inflation expectations (via the 5-year, 5-year inflation swap forward) have remained stable over the past month, from 1.689% on September 21 to 1.673% on October 19 (still well-below the yearly high set in January at 1.774%).

It’s very possible that, excluding some commentary on Italy, the ECB meeting yields little if anything at all. Italy’s budget should come up at some point, as it stands to reason that as the former head of the Italian central bank, ECB President Mario Draghi will be more comfortable opining on local political issues of his native country than he might be of say, France or Germany. If the ECB moves markets on Thursday, conversation around Italy at the press conference will be the source.

In terms of economic data during the week, Wednesday’s preliminary October Eurozone PMI releases stand the best chance of moving markets; otherwise, in the current environment where volatility is picking up and the Euro isn’t at the center of the maelstrom, minor data releases will be overshadowed and ignored. In general, economic data hasn’t been strong for the Euro, with the Citi Economic Surprise Index having eased -26.5 to -29.2 over the past month.

Finally, looking at positioning, according to the CFTC’s COT for the week ended October 16, speculators increased their net-short Euro positions to 29.3K contracts, an increase from the 16.1K net-short contracts held in the week prior. Through the rest of October positioning will continue to be a non-factor for the Euro (i.e. the risk of capitulation (covering) due to extreme positioning is extremely low).