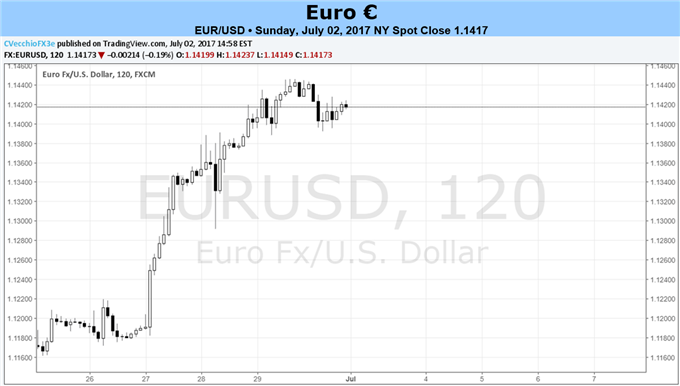 - EUR/USD sailed into fresh yearly highs last week, and may have a new bullish catalyst to work through the summer months.

- The only EUR-cross that was negative last week was EUR/GBP, which was diverted thanks to surprising central bank commentary (but not from the ECB).

After several weeks of sideways trading, the Euro finally picked a direction. The Euro gained versus every major currency last week save for the British Pound, as European Central Bank President Mario Draghi’s commentary on Tuesday sent the single currency higher across the board through the end of the week. The sudden shift in tone by the head of the ECB at the end of the month and the quarter has now given the Euro the bullish catalyst it has been sorely lacking in previous weeks.

As we turn the calendar to July and Q3’17, the Euro now finds itself in the enviable position of having a central bank seemingly set on the normalization path, which should underpin a bullish tone through at least the September policy meeting, when the ECB will unveil new staff economic projections (SEPs). While academic in some aspects, ECB President Draghi’s speech this past week yielded important insight into the ECB’s thought-making processes that should hold sway over FX markets for the foreseeable future.

Perhaps the most interesting and important set of commentary from ECB President Draghi came regarding the relationship between inflation and the unemployment rate, which is plotted along what is known as the Phillip’s Curve. Historically in developed economics, it has been observed that lower unemployment rates (tighter labor markets) tend to bring about higher inflation pressures (via wage growth).

Thus, even as inflation rates remain uneven across the Euro-Zone and still below the ECB’s +2% target, and even as energy prices have fallen back and are now negative year-over-year, ECB President Draghi feels that a rebound in inflation pressures is possible after the mid-year slump, thanks in part to the overall improved growth and labor outlooks for the region. Further drops in the unemployment rate should translate into higher inflation, which will be reason enough for the ECB to further scale back its QE program sometime in the coming months.

For the Euro, this now means there is a tangible reason to trade around for the summer months, when previously the Euro was desperately searching for a catalyst. Looking ahead into the immediate future, with a rather quiet ECB calendar in the days ahead and an equally light economic docket, the Euro will keep this new development in the background and likely cede the spotlight to its counterpart across the pairs – be it the British Pound, Japanese Yen, or US Dollar.