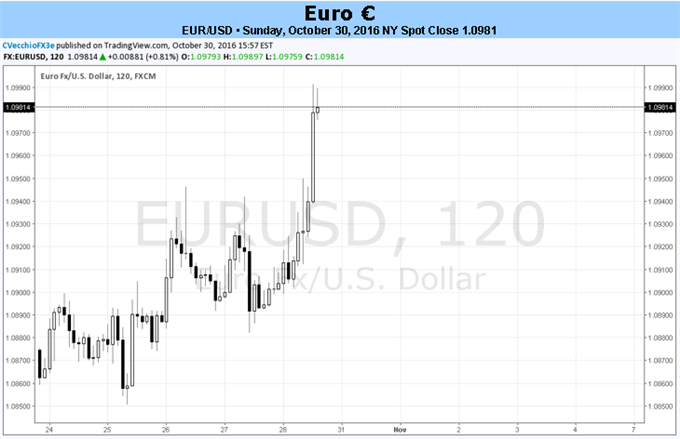 - Markets may be thinking ECB is behind the curve after recent data surprises.

The Euro had quite a strong week on approach to the end of October, finishing higher against all of the major currencies covered by DailyFX Research. EUR/USD’s gains could be considered modest (+0.92%), relative to the performances by EUR/JPY (+1.81%), EUR/CAD (+1.41%), and EUR/GBP (+1.32%). Whereas EUR/USD weakness arrived late in the week on the back of headlines pertaining to the US Presidential election, Euro strength, generally speaking, was evident for most of the week as it appears markets are casting doubt on the European Central Bank’s dovish outlook.

Whereas the initial Euro rally after the ECB’s October policy meeting was quelled, thanks in large part to ECB President Mario Draghi himself outlining the path to a shift in the QE program in December, last week’s gains reflect a mindset that the market may believe the ECB is falling behind the curve. A look at the recent rise in the German Bund 10-year yield illustrates this point, having gained +32.8-bps in recent weeks to 0.167% by market close on Friday.

Supporting the recent rise in European yields (reflecting credit weakness and/or discounting future ECB policies) has been a sharp jump higher in economic data trackers during the month of October. Analysts and economists, riding the coattails of the ECB’s policy forecasts, may have been too pessimistic in their expectations for data: the Citi Economic Surprise Index for the Euro-Zone jumped to +43.5 on October 28 from a mere +2.6 on September 30.

Concurrently, with data generally perking up more than anticipated, Euro-Zone inflation expectations have run to their highest level since June 1. 5-year, 5-year inflation swaps now yield 1.477%, up sharply during the last month from +1.355% on September 30. It bears mentioning that this medium-term market gauge of inflation is still well-below the ECB’s medium-term target of +2%, but the recent rise may be due to incoming base effects thanks to energy prices.

Consider where Brent Oil (priced in US Dollars) closed on Friday: $49.71/brl. It is up +1.4% from one-year earlier, when it traded at $49.05/brl. Now consider where Brent Oil traded on the first day of 2016: $27.10/brl; year-to-date, Brent Oil has risen by +83.4%. Even if energy prices moderate over the next several weeks, there is still a very high likelihood that they will be a tailwind for CPI reports through at least the end of the year; there will be a strong “base effect” impact.

Reflexively, however, now that yields in Europe are rising, they may actually give the ECB the breathing room it needs to conduct its bond buying program more effectively through its March 2017 run period

What will likely happen: at an upcoming meeting, the ECB will indicate that it needs to adjust the way its bond buying program is conducted. To remove ‘taper tantrum’ concerns, the ECB needs to either: remove the limiting parameter of -0.40% on its bond buying; or discard the capital key variable. In the first case, short-term German yields would like move lower the fastest; in the second, short-term peripheral yields like in Italy and in Spain.

Still, with headline inflation well below the ECB’s medium-term target – the October CPI report on Monday this week should show as much, with the headline due at +0.5% y/y and the core headline at +0.8% y/y – it seems more likely than not that in the event of the changes to the QE program being made in December, it is likely that an extension of the program is announced. If the deposit threshold and capital key are kept in place as the limiting parameters to the QE program, at this point then it’s possible some tapering built in. With Euro-Zone growth still meandering around – Q3’16 GDP is due out at +1.6% annualized on Monday alongside the CPI report – it may be that the market is getting ahead of itself in the short-term, not that the ECB is getting behind the curve in the long-term. –CV