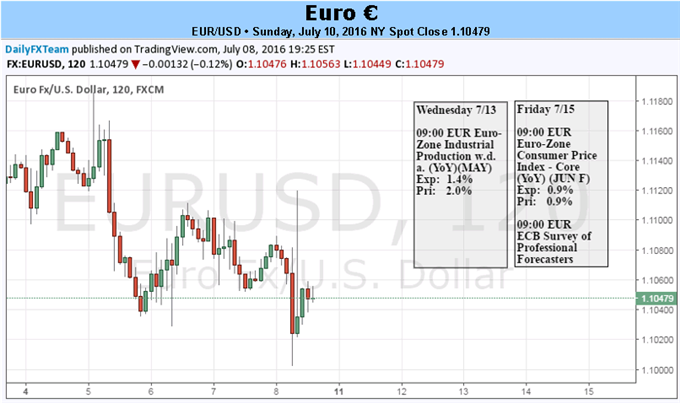 - Italian government likely to move to

The first full week of July was a middling one for the Euro, with no clear differentiation in performance among the typical high yielding-low yielding/risk-funding currency fault lines. Case and point: the British Pound and the Swiss Franc were the worst performers; while the Japanese Yen and the New Zealand Dollar were the best. Instead, markets still remain highly attuned to developments out of Europe, specifically the UK, as the political and economic fallout from the June 23 referendum continues to take shape.

According to data compiled to the Wall Street Journal last Monday, July 4, 19% of loans on Italian banks’ books are bad, amounting to €360 billion. For context, at current exchange rates (roughly €398 billion), that means Italian banks have nearly three times as many bad loans as US banks did when the global financial crisis reared its head. This is a major cause for concern. The Bank of Italy’s Quarterly Economic Bulletin on July 15 should shed additional light onto the festering situation.

Given the country’s lackluster pace of growth and ongoing slide in Italian banks’ equity, there are two possible outcomes: a collapse of the Italian banking system, which would have tremendous consequences as the Euro-Zone’s third-largest economy; or more likely, a bank bailout is on the way. Bad loans – nonperforming loans – clog up banks’ balance sheets, rending them unable to use the capital in more productive manners.

As nonperforming loans increase, banks need to set aside more capital in case of a write-down. In turn, they can’t lend elsewhere as they prepare their capital firewall. When banks do loan, the fall in long-term rates and the flattening yield curve (narrower 2s10s) means banks’ net-interest margin is being squeezed even more – profits are down – making it harder to dig out from underneath the bad loans. It’s a vicious cycle, and the only logical conclusion (given the policymakers active and their guiding principles) is that bailout funds are coming down the pipeline.

This is Italian Prime Minister Matteo Renzi’s political paradox: bailout the banks, potentially violate EU law, and enflame populist tensions against a backdrop of growing MS5 (anti-EU, anti-establishment party) support, which would eventually cost him power; or try and appease the populist uprising, don’t bailout the banks, and risk another 2008-like swoon. Instead of Lehman Brothers, this time it will be one of the European zombie banks – Credit Suisse, Deutsche Bank, Monte Paschi – that provokes the next crisis. Coupled with the referendum on constitutional reform the prime minister is trying to achieve shortly down the road, one has to think that Renzi’s Paradox could prove to be another costly political gamble that tears at Europe’s fabric of integration – much like then-UK Prime Minister David Cameron’s misguided election promise to hold the EU referendum vote at all.

In the short-term, a bailout of the Italian banking sector will probably be a positive development (or at least a less negative one) for the Euro. After all, it would kick the can down the road for another while, removing the non-zero tail risk of another financial crisis before quarter end. But after the Brexit vote, it seems that the end of the road is near – voting populaces don’t seem to be fond of playing the game of kick the can anymore after years of stagnant wage growth and growing income inequality. The window for Europe’s leaders to figure things out is open, but it won’t stay open for long. –CV