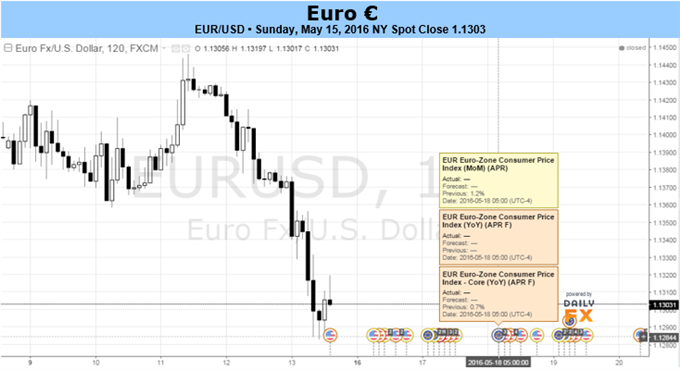 The Euro took a small step back last week, with EUR/USD losing ground especially quickly over the last two days of the week as US economic data started to turn in a bit better than expected. Yet even as economic data for the Euro has picked up in recent weeks – the Citi Economic Surprise Index has improved from -25.3 on April 15 to -7.4 on May 13 – the overhang of the weak growth environment is proving considerable (as evidenced by the mixed-to-disappointing Q1’16 Euro-Zone GDP data release on Friday).

The last two weeks of declines in EUR/USD have come despite inflation expectations edging up alongside energy prices. The 5-year, 5-year inflation swap forwards, a market measure of inflation expectations, has increased from 1.402% on April 15 to 1.478% on May 13. After the European Central Bank adjusted their forecasts in their staff economic projections at the March meeting, Brent Oil is approximately +40% (relative to the front month and December 2016 contracts) above the ECB’s 2016 technical assumption as of market close on Friday. 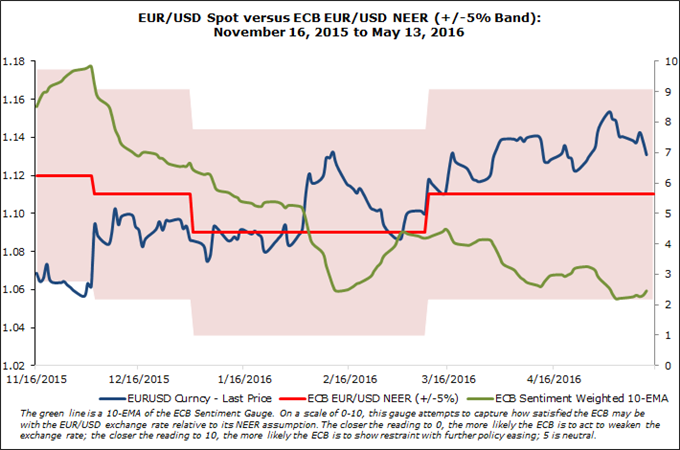 As the ECB had previously declared that they were no longer targeting the FX channel, the Euro had been given some breathing room to rally against its peers. But it’s fallen back, and after the March adjustments to the forecasts, EUR/USD is now only +1.88% above the ECB’s 2016 technical assumption of $1.1100 (it was +3.91% above on May 2) (chart 1 above). Put plainly, with energy prices edging up, the Euro is becoming less of an issue for the ECB.

In weeks past, markets had been holding onto hope for looser ECB policy by the end of the year. But between the recent improvement in data relative to expectations (as evidenced by the Citi Economic Surprise Index mentioned earlier) and financial market movements (the Euro and Brent Oil), there is seemingly less of a reason to look for more ECB action. While we know that the door for more action isn’t closed – the March ECB minutes revealed as much – markets aren’t confident that new easing measures are coming this year. EONIA rates markets are no longer leaning towards a rate cut by December (chart 2 below). 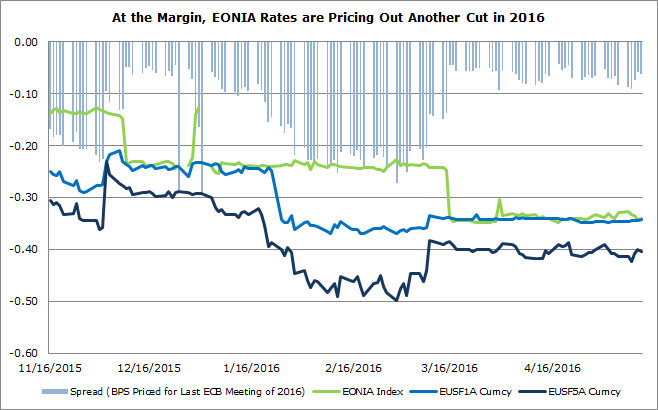 From another perspective, overnight index swaps, we can see that traders no longer believe that the ECB will cut its main refinancing rate or deposit rate again this year (charts 3 & 4 below).

With market measures of ECB expectations having fallen back, traders have backed away from aggressively shorting the Euro. In turn, this reflexively has created a significant amount of room for the Euro to depreciate, should conditions dictate so. According to the CFTC’s most recent COT report, non-commercial futures traders held -21.9K net-short Euro contracts – the fewest since the last week of May 2014. Likewise, the same group of traders is coming off the smallest net-long position in the US Dollar (via DXY) since the second week of June 2014.

In aggregate, we can surmise that non-commercial positioning is effectively the least short EUR/USD since heading into June 2014. This represents significant potential for a decline. The question is, what will be the catalyst? With ECB rate cut expectations pulling back, and European sovereign bond yields exceptionally low (yields negative out to six years in France, out to nine years in Germany, and out to 15 years in Switzerland), it seems likely that near-term catalysts would have to come from the US Dollar side of things. In the near-term, if US economic data continues to perk up (the Atlanta Fed’s GDPNow Forecast for Q2’16 GDP is +2.8%), more price action like what was seen to close out the week is possible – positioning isn’t in the way by any means. –CV