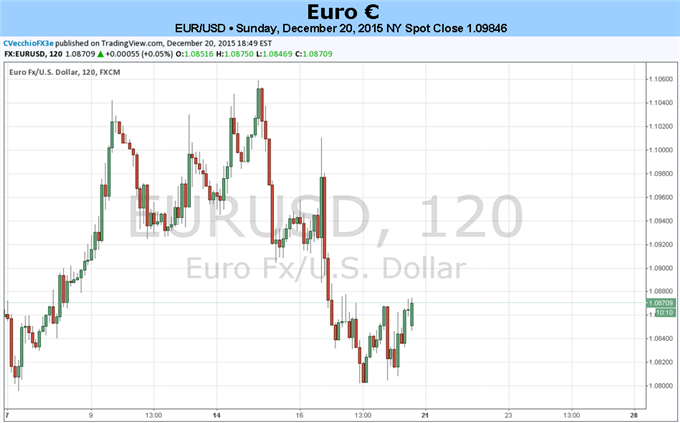 Euro's Economic Calendar Thins Out Through End of Year

- The Federal Reserve’s first rate hike since June 2006 has insulated the US Dollar, for now.

The Euro slipped marginally last week, but moved mostly sideways into the ides of December. EUR/NZD was the worst performing EUR-cross, finishing lower by -1.25%, while EUR/GBP was the best performer of the lot, gaining +1.03%. EUR/USD traded lower around the Fed’s rate decision, but maintained its post-ECB swing lows near $1.0800 from earlier in the month.

Going into the end of the year, conditions in the market have become rather sensitive to the “next” policy moves from the ECB and the Fed. Thanks to a rather obvious pattern of behavior that emerged at the end of the year, whereby developed economies’ central banks stopped instituting policy changes outside of meetings that were accompanied by changes to their staff economic projections.

What this means for EUR/USD is that market participants will be keenly focused in on incoming inflation data to see how whether or not it (a) stays depressed enough in the Euro-Zone to warrant more easing by the ECB and (b) picks up fast enough – even for the core (ex-food and energy) readings – in the United States to justify the Fed’s expected four rate hikes in 2016 (Fed funds futures are pricing in only two, so there is a divergence in views that could be closed which will be a significant determiner in which way EUR/USD moves).

Over the next two weeks, there are very few if any economic data releases that are directly related to inflation in the Euro-Zone broadly, so it thus seems probable that said data will have very little meaningful influence over the EUR/USD exchange rate. Nevertheless, traders might want to keep an eye on the initial December Euro-Zone Consumer Confidence report due on Monday (12/21), the January German GfK Consumer Confidence report on Tuesday (12/22), and the final Q3’15 French GDP report on Wednesday (12/23). The following week, the only major data relevant to the Euro is the November German Retail Sales report on Monday (12/28).

As we approach the holidays and thus less liquid markets through the end of the year, it's worth reviewing principles that help protect your capital. We call these principles the "Traits of Successful Traders." –CV