Greece Kicks the Can again, Euro Only Benefits if Focus Turns to Data 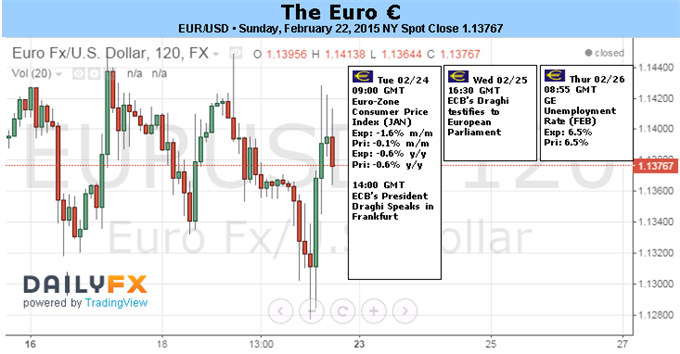 - The retail crowd remains net-short EURUSD, but has taken the dips as an opportunity to reduce shorts.

- Technical breakdowns in EURJPY and EURUSD have been disrupted by Greek-related headlines.

After a week filled with doubt and uncertainty, the Euro was able to look past tumultuous headlines surrounding the Greek-Eurogroup debt negotiations, and finish mostly unchanged against a basket of its major counterparts. On the extremes, EURAUD fell by -1.15% and EURCAD gained +0.55%, while in between EURGBP slipped by -0.14% and EURUSD edged lower by -0.11%. Needless to say, these price movements aren’t exactly the signs of the wheels falling off the Greek negotiations, or an existential crisis about the fate of the Euro entering the discussion.

Traders, having already embraced one of the most bearish views of the Euro on record – having entered the week with 194.6K net-short contracts on the books, just shy of the all-time high of 214.4K net-shorts set during the week ended June 5, 2012 – may have simply reached an exhaustion point for interpreting Greek-related headlines. With short positions having been marginally reduced for the week ended February 17 (down to 185.6K net-short contracts), traders may be best suited to take advice from one of the legends, George Soros: “The worse a situation becomes the less it takes to turn it around, the bigger the upside.”

Lingering concerns over how the Greek agreement with the Eurogroup plays out are holding the Euro back. The extension agreement kicks the can down the road for four months, eliminating an immediate insolvency concern, but does little to address the ongoing liquidity crisis faced by Greek banks. Estimates suggest that some €10-20bn have been withdrawn from Greek banks over the past three-months, leaving the Greek banking system wholly-reliant on the European Central Bank’s emergency lending assistance (ELA) facility. For now, with the possibility that the ECB restricts ELA access (like it did to Cypriot banks in 2013), traders may be keeping their bearish Euro positions on the table with an eye towards capital controls and bank holidays hitting Greece over the coming weeks.

If only markets were able to shift their attention away from Greece, might the Euro be able to benefit. As we saw in the first set of ECB minutes released on Friday, the debate within was not only about the timing of a QE program (non-news; we know it begins in March) but also about what conditions could necessitate the end of the German-despised, expansionary program. This is a conversation worth paying attention to, especially now that incoming data from the Euro-Zone is improving at a solid pace.

The Citi Economic Surprise Index for the Euro-Zone hit +56.1 at the end of the past week, its highest level since March 7, 2013 (+56.5), while blowing out to its widest spread against its US equivalent since September 2010. In other words, relative to expectations, Euro-Zone data has been outpacing US data at its best clip in nearly four and a half years. Accompanying the improved data have been measures of rate expectations backing off all-time extremes, too. Morgan Stanley’s ‘months to first rate hike’ index (MSM1KEEU) resides at 45.6 (suggesting a December 2018 rate hike), down from levels seen over the past few weeks suggesting that rates would remain unchanged until March 2019.

The Euro-Zone is still a bonafide mess, politically and economically, but the data has undoubtedly been more positive in recent weeks. Inflation expecations have steadied too: the 5-year, 5-year inflation swaps (FWISEU55) ended the week at 1.603%, just above the four-week/20-day average of 1.586%. But for lingering concerns over Greece, the current 185.6K net-short contracts among speculators looks overdone – providing a viable source of tinder for a short covering rally. –CV