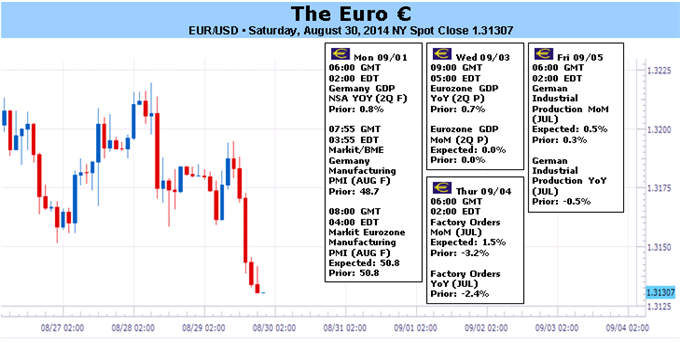 - ECB President Draghi’s commentary at Jackson Hole set the tone for a weaker Euro all week.

- Traders expecting action on Thursday might find opportunities in the EURUSD downtrend or EURJPY inverse H&S.

The Euro was the worst performing major currency last week, extending its losing streak against the US Dollar to seven consecutive weeks. EURUSD’s -0.84% drop last week sunk it to $1.3131, its lowest exchange rate since September 6, 2013. In part. The US Dollar’s own stretch of strong data is helping keep it afloat; conversely, there is a great deal of negativity currently encircling the Euro.

The change in European Central Bank Mario Draghi’s tone has been significant since the Jackson Hole Economic Policy Symposium. Instead of ascribing the Euro-Zone’s low growth, low inflation, and high unemployment issues to ‘transitory’ factors, the head of the ECB among, other policymakers, is now accepting that the current weak economic environment is more or less a permanent condition.

Recent economic data has been so poor that another dip into recession across the Euro-Zone is possible – the third recession since the start of the global financial crises beginning in 2007. The Citi Economic Surprise Index fell to -45.1 on Friday, eclipsing the July low and setting a new yearly low for the year. The Euro’s problems are clearly related to economic and geopolitical concerns, as the liquidity conditions in the Euro-Zone are more than plentiful (EONIA fell at low as -0.04% on Thursday, the first time it has even been negative).

Even as Euro-Zone CPI hits its lowest levels since October 2009 (at +0.3% y/y), the aforementioned factors may not be enough to push the ECB into acting this week – at least in the unconventional, QE-inspired manner that market participants may be hoping for. The preferred timeframe to implement new measures is after October, when the ECB finishes collecting and analyzing banks’ balance sheets for the stress tests (AQR).

If it’s too soon for outright QE and meaningless to go forward with another rate cut given regional liquidity conditions, then perhaps the ABS purchase front will pique interest. Even then, substantive action may be falling short of expectations. The most significant steps taken might be downgraded inflation expectations; but that too is only dovish rhetoric at best. With non-commercials/speculators, at 150.7 net-short contracts, the most stretched since July 24, 2012 (155.1K contracts), any disappointment along the easing front could be enough to stoke a short-covering rally by the 18-member currency. –CV