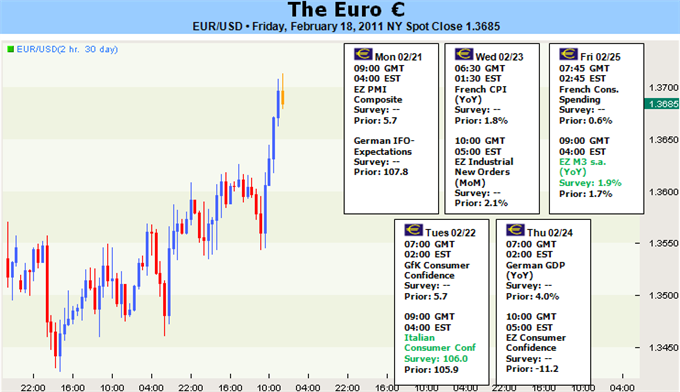 Euro Advance to be Short-Lived, Sharp Correction in the Horizon

The euro halted its three week decline against the greenback as inflation concerns continue to drive the single currency higher, while market participants shrug off rising yields amongst indebted countries in the bloc. Looking ahead, currency traders should not rule out prices pushing back towards the 1.37 area as technical developments begin to paint a bullish picture.

This past week, the EURUSD broke above two key levels of resistance as risk appetite regained its footing. One key factor driving the euro was the Federal Reserve upgrading economic growth in the world’s largest economy to 3.9 percent which was higher than previous projections, according to the minutes of the central’s bank’s latest meeting. The result was risk positive, helping to push the euro higher. Secondly, hawkish comments by European Central Bank Executive Board member Lorenzo Smaghi added fuel to the euro fire as Mr. Smaghi said that the central bank may raise rates as price pressures mount. At the same time, Mr. Smaghi said that “as the economy gradually recovers and global inflationary pressures arise, the degree of accommodation of monetary policy has to be monitored and, if needed, corrected.” These comments pushed the euro past the key barrier of 1.6. Though recent developments point to further gains in the single currency, traders should caution a sharp reversal as the yield of troubled economies continue their northern journey.

Looking ahead, EUR traders will be faced with industrial new orders, economic confidence, and the M3 money supply. The M3 money supply is of great importance due to the fact that it serves as the broadest measures of money supply in the 17 member euro area. As an increase in money supply tends to lead to price inflation, a better than forecasted release could fuel price concerns which has been the main driver behind the euro as of late. However, as lending markets remain subdued, traders should not rule out a dismal release. Furthermore, market participants should also closely monitor the bond markets as both Ireland’s elections and Portugal’s funding requirements are key risks for the markets ahead of the highly anticipated EU summit in March.

Taking a look at price action, the EURUSD has extended its two day advance to test the 20-day SMA for resistance. Meanwhile, the slow stochastic indicator has flipped to the upside, pointing to additional gains, while the pair managed to crossover above its descending 4 hour channel. So long as downside risks remain capped by 1.36, upside risks remain.