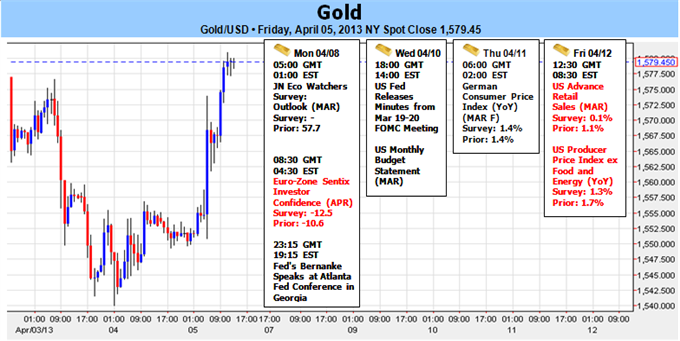 Gold is softer at the close of trade this week with the precious metal off by nearly 1.5% to trade at $1573 in New York on Friday. Price action this week saw a surge in volatility with bullion testing the critical support range between $1550- $1555 noted last week. The reaction off this level however gives reason for pause as weaker than expected US data this week (particularly in employment and ISM figures) could offer some support to the beaten precious metal.

Non-farm payroll data on Friday grossly missed consensus estimates with a print of just 88K for the month of March with the data prompting a substantial sell-off in equity markets as gold firmed. Weakness in the US dollar further supported the late week rally in gold as investors pared back expectations that the Fed may look to cease QE operations in the near-future. Although the headline unemployment rate did drop by 0.1% to 7.6%, it’s important to note that the workforce contracted by nearly 500K last month bringing the participation rate down to 63.3, its lowest print since 1979. Accordingly, it’s unlikely that the central bank will make any changes to current monetary policy with the expectation of more easing likely to keep gold prices afloat, at least in the near-term.

The FOMC minutes highlight the most significant event risk next week as investors look to gauge future policy shifts from the central bank. Although the minutes are likely to reinforce the Fed’s commitment to keeping policy accommodative, the voting members may sound more upbeat this time around amid the resilience in private sector consumption along with the stabilization seen in the housing market. In light of Friday’s dismal NFP print however, we may see the minutes offer a more muted reaction as investors continue to eye the sluggish recovery seen in the employment sector. Retail sales data on Friday will close out the docket for the week with consensus estimates calling for a flat read for the month of March after posting a 1.1% gain in February. Look for gold to take cues from broader market sentiment and if the correction in risk assets gather pace, we may see gold well supported in the near-term as the dollar softens on exceptions for prolonged Fed easing ahead.

From a technical standpoint, gold has now achieved the targeted range noted in the December quarterly forecast and the risk for a rebound off key support at $1550- $1555 now rises in the near-term. Topside resistance stands at the $1585 pivot level which represents the 138.2% Fibonacci extension taken from the decent off the October highs with a breech above this mark risking a run on the 23.6% retracement from the October decline at $1600. Only a weekly close above last month’s highs at $1616 invalidates interim bearishness with such a scenario eyeing the critical resistance range between $1626- $1631. A break below this week’s lows puts the broader trend back into focus with support targets seen at the May 2012 lows at $1527 and the long-term 78.6% extension taken from the decline off the record highs at $1483. Bottom line, the weekly, monthly, and quarterly opening range is set with a breakout of the current April range to offer further clarity on a near-term directional bias. -MB