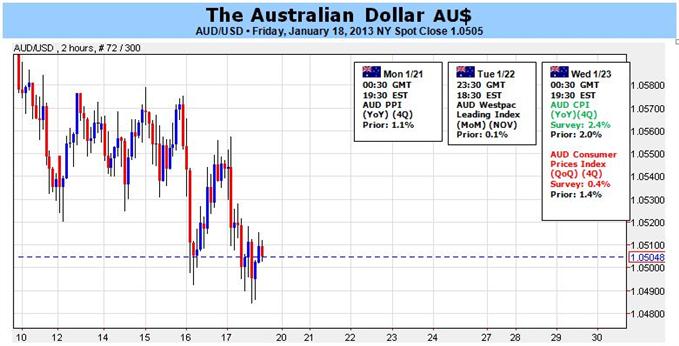 Australian Dollar May Struggle to Find Bid Despite Sticky Inflation

The Australian dollar struggled to maintain the rebound from the beginning of the year, with the AUDUSD slipping to a low of 1.0484, and the high-yielding currency may depreciate further in the week ahead as the weakening outlook for the $1T economy raises the scope for additional monetary support. Nevertheless, Australian Treasurer Wayne Swan tried to talk down the risks surrounding the region and said that the economic outlook remains strong, but we may see the Reserve Bank of Australia continue to carry out its easing cycle over the coming months in an effort to encourage a stronger recovery.

Although Australian consumer prices are projected to expand at a faster pace in the fourth-quarter, the core rate of inflation is expected to hold steady at an annualized rate of 2.4%, and the data may fail to increase the appeal of the high-yielding currency should the print fall short of market expectations. Indeed, the recent weakness in the labor market along with the slowdown in private sector consumption may ultimately produce a weaker-than-expected inflation report, and a further slowdown in price growth is likely to fuel bets for more easing as the RBA Governor Glenn Stevens maintains a cautious tone for the region. According to Credit Suisse overnight index swaps, market participants still see the central bank lowering the benchmark interest rate by nearly 50bp over the next 12-months, and Governor Stevens may show a greater willingness to cut borrowing costs further at the February 4 meeting in an effort to stem the downside risks for growth and inflation. At the same time, Fitch Ratings continued to highlight the risk for a ‘hard landing’ in China – Australia’s largest trading partner – as the new government appears to be moving away from its export-driven market to a more consumer-based economy, and the shift in public policy is expected to have an adverse effect on the Australian economy as the resource boom comes to an end.

As the relative strength index on the AUDUSD continues to find resistance around the 67 figure, the short-term pullback in the exchange rate may gather pace in the days ahead, and we are looking for a move back towards the 61.8% Fibonacci retracement from the 2011 high to low around 1.0430 as it carves out a lower top just below 1.0600. However, should Australia CPI disappoint, speculation for further rate cuts may threaten the upward trend carried over from 2012, and we may see the pair give back the rebound from earlier this year as interest rate expectations remain tilted to the downside. - DS