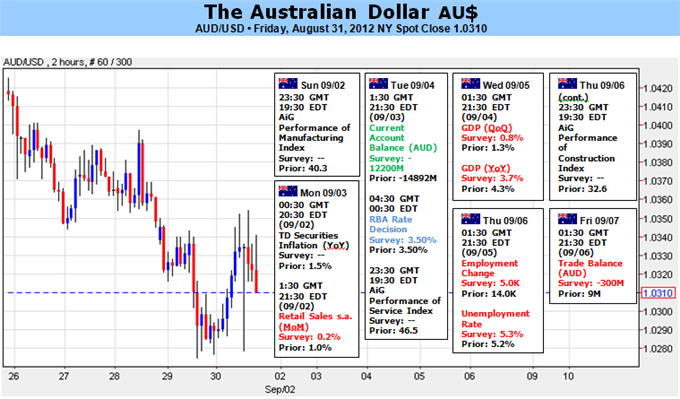 Australian Dollar May Have Topped, but Upcoming Week is Critical

Australian Dollar May Have Topped, but Upcoming Week is Critical

The Australian Dollar finished the month as the worst-performing G10 currency despite relative calm in the US S&P 500 and broader financial markets. We believe that underperformance serves as further confirmation that the AUDUSD may have set a substantial top amidst clear risks of market complacency.

The month of August was not kind to the previously high-flying Australian Dollar, and September threatens to continue the AUD’s sudden losing streak on a potential turn from sentiment extremes. The AUD was previously the strongest-performer among the G10 from June through August; extremely quiet market conditions encouraged traders to go long the highest-yielding AAA-rated currency against lower-yielders.

Yet the mix of extremely low volatility and high interest rates may have proven to be too much of a good thing—there were important signs that speculators had ultimately grown complacent and a turn was imminent. Recent CFTC Commitment of Traders data shows that large speculative futures traders were their most net-long AUDUSD since the pair set record-highs almost exactly one year ago. And though sentiment extremes are only clear in hindsight, it’s clear that any sudden market panics could encourage leveraged investors to exit AUDUSD-long positions in a hurry. The week ahead could provide that spark with significant Australian economic event risk and potentially pivotal events for the US and Euro Zone.

A Reserve Bank of Australia interest rate decision starts us off at 04:30 GMT on Tuesday, September 4, while the following day’s Q2 Gross Domestic Product numbers and Thursday’s Employment figures could force major moves across AUD pairs.

Reserve Bank of Australia officials will likely leave interest rates unchanged through their upcoming meeting, but any important shifts in rhetoric could easily affect interest rate expectations and the Australian Dollar itself. Overnight Index Swaps currently predict that the RBA will cut its benchmark rate by 0.92 percentage points over the coming 12 months—undoubtedly a negative influence on the yield-sensitive AUD. The statement following the RBA’s August 7 announcement showed no sense of urgency, but that could change on any particularly significant shifts in economic data and particularly shifting forecasts on the future of Chinese economic growth.

Needless to say we’ll keep an eye out for substantive disappointments in upcoming GDP and Employment figures, but the most explosive fireworks could come on a highly-anticipated European Central Bank interest rate decision on Thursday as well as a US Nonfarm Payrolls report due Friday. (See US Dollar and Euro Forecasts for more.)

FX Options market volatility expectations have picked up from multi-year lows as traders prepare for a make-or-break month for the Euro, US Dollar, and broader financial markets. The Australian Dollar’s correlation to the S&P 500 and other ‘risk’ metrics weakened materially in August as stocks moved higher while the AUDUSD declined. Yet we suspect that any significant volatility would quickly force the Aussie currency to move in virtual lock-step with global equities.

All hands on deck for the official end to the summer and the beginning of a truly pivotal period for global markets. –DR